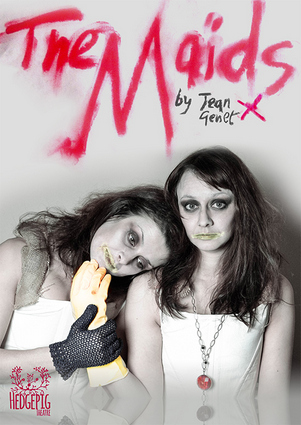 Gemma Sharp and Anna Rose James in The Maids.

Hedgepig Theatre is bringing Jean Genet’s black comedy The Maids to The Fleeting Arms this summer.

The Maids tells the story of two sisters who plot to kill their mistress in a most unusual way, with Hedgepig Theatre using the tag line ‘Ritual turns to compulsion. Compulsion turns to obsession. Until their world unravels around them’.

It focusses on the paranoia and power plays of the two sisters who find themselves caught between their love and hatred for both their mistress and each other.

Taking up the roles of Solange and Claire, the maids, are Gemma Sharp and Anna Rose James, with Victoria Delaney as Madame. The Play features music by Alexander King, costume design by Julia Smith and lighting design by Kelli Zezulka.

Hedgepig Theatre was founded by Sharp, who is a writer as well as an actress, and director and actor Andy Curry. They work with a team of creatives from in and around North Yorkshire, who provide such services as filmmaking, set design and music production.

The Maids will be performed at the Rural Arts Courthouse in Thirsk on the 21st May, Seven Arts Theatre in Leeds on the 29th May, and at The Fleeting Arms in York between the 4th and the 6th of June 2015.