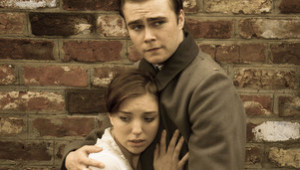 York Settlement Community Players (YSCP) are bringing Bertolt Brecht’s Drums in the Night to a York stage for the first time.

Drums in the Night looks at how the First World War affected Germany in 1919, politically and personally.It follows Andreas

It follows Andreas Kragler (George Stagnell), a returning soldier, who was thought dead for the past four years. Andreas despairs at discovering his fiancée, Anna (Emma Dubruel) has got engaged to war profiteer Murk (James Witchwood), and he is drawn into the backstreets of Berlin. Here, barman Glubb (Ian Giles) and his associates convince Andreas to join the Sparticist Uprising. Andreas must eventually choose between revolution and the woman he loves.

The play that made the man?

Brecht wrote more than 30 plays and is known for developing theories on Epic Theatre. However, Drums in the Night preceded these theories and is his second play. He was 24 years old when it was first performed, the same age as the production’s director, Claire Morley.

Morley said: “I think people will find the play engaging for different reasons: there’s the draw of Brecht, who is undoubtedly one of the greatest playwrights of the 20th Century; the insight into a part of Germany’s history which is often overlooked, and there are the universal themes of love, betrayal, jealousy and disaffection with politics, which will strike a chord with lots of people.”

Drums in the Night is coming to Friargate Theatre from Thursday 30th April until Saturday 2nd May 2015. Performances are at 7.30pm, with a 2pm Saturday matinee.