Drums in the Night offers a different look at WWI 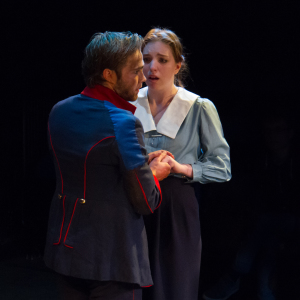 As wars still rage and politics hold us hostage, this election term seems the perfect setting for, Drums in the Night, Bertolt Brecht’s early play about passion, revolution, grief and action.

York Settlement Community Players bring an unusual choice of text to York’s attention to tie in with the centenary of World War One, which surrounded the birth of the script itself. And what could be more fitting than for 24-year-old director Claire Morley to take on the play Brecht crafted at the same age; raw with response to the world he found himself in, and raring to share it.

Drums in the Night sees the return of war-changed soldier Andreas Kragler (George Stagnell) to his hometown and sweetheart Anna Balicke (Emma Dubruel) – now betrothed to war profiteer Friedrich Murk (James Witchwood) with the firm and watchful backing of her parents (Ian Giles and Beryl Nairn). The ensemble is made up by Andy Love, Sonia Di Lorenzo, Tim Holman and Mark Simmonds, with all but Stagnell playing multiple roles.

A traverse stage sat strictly laid out with minimal box furniture plastered in German newspaper pages and lit by a paper lantern red moon, transmitting from the first the ominous, oppressive, rousing tone of the story.

“Every man’s a hero in his own skin.”

Translated by John Willett, the text is at times clinical and at others poetic, and steeped in passionate feeling. There are moments of clunkiness, though this is well-handled by a tight-knit ensemble who comfortably and naturally deliver a convincing, moving performance full of weight.

“He feels like he’s dead but he won’t lie down.” 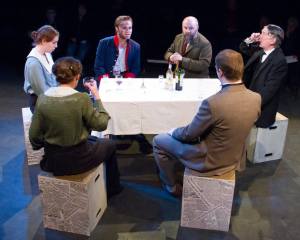 All of the case, except George Stagnell, play multiple roles (Photo courtesy of Michael J Oakes)

Dubruel brings grace and fragility to a heroine who is largely relegated to submission and victimhood, while Love provides the relief of a tender, paternal figure speaking spiritual sense under the din of drunken hysteria protracted by the Balickes.

Giles owns the stage in the opening, and rides a repetitive dialogue to raise the brimming tension in the first act.

Smart, vogue costumes and impressive, disconcerting war wounds are provided by Helen Taylor and Natalie Heijm respectively, and Morley’s direction involves natural, flowing choreography that serves to keep the momentum in the roof throughout. A rushing sequence of identical long black coats makes for a chilling turning point.

For all the uprising and overturning in this play, it remains a product of its time in that there isn’t much feminism to be seen. Female roles are stereotypical submissive heroines and plot points. Men clink glasses while women are noticeably uninvolved, and argue over their fates as if they are property. It would be interesting to see a production in which Anna has more chemistry and investment in her relationship with Murk, in order that we might see more of an internal struggle of two conflicting desires within her, rather than a play of misguided loyalty first to her parents and then to her lover.