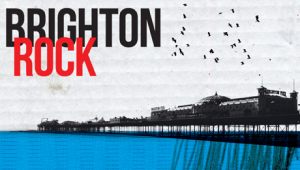 It is usually easy to impose your own zeitgeist onto a piece of live theatre, because there is so much ambiguity – so many variables for each viewer to interpret however they wish. It is a struggle to forage the attraction of adapting Graham Greene’s noir thriller, which now seems largely irrelevant, but Bryony Lavery is enough of a draw to intrigue those who have or haven’t read the original novel.

The production values of this collaboration between York Theatre Royal and Pilot Theatre are as slick as the characters are unsalvaged; Hannah Peel’s live electronic score juxtaposed with Lavery’s signature acute sentimental archery gives a pulse to Greene’s otherwise heartless tale of a Brighton underworld in flux. Haunting singing, sensual beats and a constant ruffling breeze accentuate Pinkie’s plight; he is a scrappy new dog in the ring proving his position, and is full of a more swelling violent dysphoria than his young body can contain. Played skillfully by the perfectly vitriolic Jacob James Beswick, more prominent here than in the novel is Pinkie’s relationship to faith – and here is the hook.

Where do you go after God?

Pinkie and Rose (Sarah Middleton) are painfully, almost impossibly soul-wizened for their years. They have seen too much to accept God at face value, but they clutch desperately to something resembling hope as they continue to bargain their principles, which is difficult to shun as outdated when it comes to the current global state of the human condition. There is of course Rose, too, whose hopeless attraction to this young man anyone else would cross the street to avoid is revealed to be less naive than determined. She rebels Pinkie’s perceived control over her by loving him even harder. During a resurgence of worldwide bigotry, must we not look to her choices for guidance on communing with our aggressors?

Ida (Gloria Onitiri) brings the story life and soul through moments of narration, sumptuous song and her relentless desire to do right by a fleeting friend. Despite a few odd silences, the cast are tight-knit and with their small number fill the room with figures, crowds, worlds to feed the whirlpool of Pinkie’s brewing storm.

Watch the trailer and catch the show in York before 3rd March here, or follow it on tour.