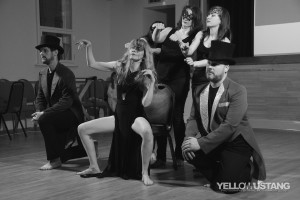 Vesper Walk’s Fist of Art uses symbolism to explore the effects of depression and anxiety. (photo by Yellow Mustang Photography).

York band Vesper Walk take a look at the effects of mental illness in their new short film, Fist of Art.

The eight-minute film, which has received backing from national mental health charity Sane, looks at how debilitating depression and anxiety can be.

It was filmed in various locations in York, including Osbaldwick and English Martyrs church, and combines various art forms, such as music, dance, drama, human puppetry, poetry and art. Vesper Walk intend to enter the film for national and international festivals.

Catherine Cowan and Lisa-Marie Baker, the sisters who founded Vesper Walk, are both passionate about how the arts can help people deal with mental illness. Quoting statistics from York Mind, they said: “It’s sobering to think that one in four people have mental health problems at some point in their life. But engaging in the arts can help, stimulating emotional responses, improving confidence and creating positive change.”

The sisters, who are classically trained pianists, formed Vesper Walk in 2013 with a view to creating a hybrid art form. Their music has four-hand piano at its core and their live shows use elements of dance, drama and projected images. Lyrically, they take on themes of fairytale, metaphor and symbolism.