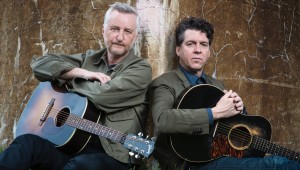 For all music fans, it is vital to understand how genres have developed over the years, how they link up and how society affects music’s development. What better way to learn than to have Billy Bragg and Joe Henry, two highly influential musicians in their own right, guide you through the folk songs of the USA’s past?

The stage of the Grand Opera House took on an understated feel, befitting of the evening’s music, while the two made a casual entrance before playing Railroad Bill. This was the first of a selection of songs romanticising the American railroad in a way that Brits probably could not imagine.

Bragg and Henry recorded their album, Shine A Light: Field Recordings from the Great American Railroad, over the course of four days as they travelled across America by train. They set up recording equipment in the towns and cities where they stopped, played the songs they wanted on the album and jumped aboard the train before it left again.

Between each song they played at the Grand Opera House, Bragg and Henry shared stories of their trip and the significance that the American railroad once had – such as the freedom that it offered and how it shaped the lives of those who worked on it. This was a rare gig where, as great as the songs were, there was anticipation for the moments between when these stories would be told.

Bragg and Henry created arresting versions of such songs as The L&N Don’t Stop Here Anymore and Hobo’s Lullaby that seemed true to the songs’ spirit and sounded timeless. Meanwhile, the musicians’ harmonised vocals created a special and unique atmosphere.

When Henry insisted that their album was not a nostalgia project, rather a performance of old songs that still hold a place in the modern day, it was easy to agree. Songs like Lonesome Whistle and In The Pines are still well known and widely listened to by people across the world, due in part to covers by Johnny Cash and Nirvana.

Either side of the interval, each musician took the time to play a selection of songs and talk with the audience. They discussed their fears about the Trump administration, their support for the Women’s March and how the lyrics on Shine A Light tie in with the concerns today. Bragg’s new songs about present politics, including a Bob Dylan cover renamed The Times They Are A Changin’ Back, raised legitimate concerns about the potential loss of human rights and questions about what citizens can do.

Bragg pointed out that the people that were romanticised in the songs on Shine A Light were persecuted and shut out at the time, drawing a parallel with both the refugees and the economic migrants of today. Indeed, this is not a problem specific to America, Bragg pointed out, as it has been happening in the UK too with refugees getting stopped in Turkey or at the border in Calais. Such parallels should not be ignored and Bragg and Henry are right that our “us and them” mentality should be abandoned. The tragedy is that most people at this gig probably already know this.

Billy Bragg and Joe Henry’s Shine A Light tour is an education on the history of rock and pop music, not just in terms of style but also in how society affected it and these songs still reflect present-day society. Already one of the most enriching shows of the year.