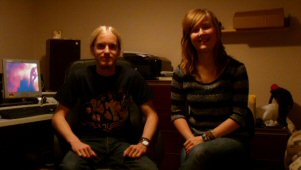 Matt and Hannah began as volunteers for Converge.

As creative activities are a great way for people to express their feelings and relieve pressure, York St John were onto something when they decided to create a service to aid people with mental health issues.

Matt Dawson and Hannah Crawford, two tutors on the music courses of Converge, explained that Converge is not a therapy session. Rather, it is a place for people who have suffered some form of mental health problem to go to express themselves.

They believe that projects like this are a vital part of society as the amount of people diagnosed with mental health problems is high. According to statistics from the Mental Health Foundation, around one in four people will experience some form of mental health disorder in a year. With rates like that, finding new ways to treat the issue is vital and creativity appears to be a great way to do this.

“It’s not a therapy session, we treat everyone as a student who is either completely new to an art – in our case music – or they might have experience in an instrument, they might be quite experienced in song-writing, but it’s somewhere to come to stimulate them back into being more creative,” Matt said.

‘You’re a student in the uni’

The two, who initially began helping out with Converge as volunteers but have since made a job out of it, explained that the service is a community music project. While it may begin with students learning about instruments and song-writing, some learners have been coming to Converge for so long that, Matt and Hannah say, they now know more about certain aspects of music than their tutors do.

As a result, they have been looking into giving people supervisory roles and making Converge into an experience where everyone learns together. For most, the course remains similar to degree learning.

Matt said “I think we try to focus more on treating [Converge] as being on a BA course, you’re a student in the uni, and I think it gives people on the course a better feeling when they turn up.”

It isn’t just bettering the musical ability of students that makes Converge stand out though, it is the difference that the service makes to people’s lives. Matt and Hannah have both had feedback that suggests this.

Hannah said “sometimes you can be quite shocked by the response because it kind of makes you realise how much it means to them. People worship Converge and without it it’s kind of worrying where they’d be. People say “my life would be nothing without Converge” and you think flipping ‘eck that’s quite a powerful thing to say.
You forget that that’s what it means to some people.”

Her view is that projects like Converge are better than medical treatment as they allow people to embrace their feelings and work through them.