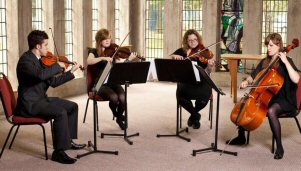 Vitula String Quartet are one with a difference. An elegant-looking group, ideal for functions, but with a modern update.

While strings are widely associated with classical music, these guys are known to branch into more contemporary sounds. From the Pirates of the Caribbean score to Lady Gaga, they like to keep things varied.

Explaining why the group enjoys diversifying with what they play, violinist Hannah Crawford explained that it’s all about exploring all of their musical tastes.

Vitula String Quartet are made up of Hannah, Nicholas Frost, Sarah Marley and Jessica Bones. All of them have experienced music as a profession; whether that is teaching instruments, getting involved in community projects or gaining a university degree.

Hannah explained they were brought together after Nicholas posted an advertisement for a string quartet in the music shop Banks. She was delighted when she found it.

She describes their first rehearsal as ‘special’. As any band member will understand, it was that moment while jamming when they realised they’d clicked with their fellow musicians.

Since their formation earlier this year, Vitula have been playing at a variety of events. The group have been booked for weddings and played at the Designer Outlet during August. They also hold a busking badge, so they can be spotted around York from time to time.

On one occasion, Hannah explained, they earned £85 after busking in the city centre for an hour and a half.

In terms of what they have planned in the near future, Hannah mentioned they have weddings and functions in mind. They have already started taking bookings for 2014.

“Basically if a wedding comes along we want to snap it up and give it a go.”

Naturally, there are no boundaries in what Vitula String Quartet will play to suit a bride and groom’s needs.

“If someone says I want Bat out of Hell to walk down the aisle to we will do it. We are open to all suggestions.”

2 Responses to Classical to contemporary with Vitula String Quartet