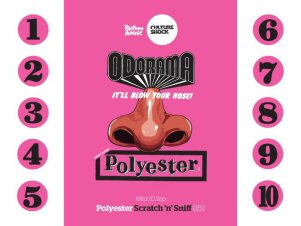 Polyester viewers will be handed scratch and sniff cards to use during the film.

In 1981, director John Waters released a film that could not only be watched but also smelled. Now it is coming to City Screen.

His film Polyester is the pioneer of the ‘Odorama’, so named because viewers were handed out scratch and sniff cards to be smelled at different points in the film. Cinema-goers got more involved with characters’ exploits as they got a whiff of the likes of pizza, model glue and even flatulence.

The film comes to City Screen after Picturehouse Cinemas director of programming Clare Binns saw a screening in Cannes. She asked one of her programmers, Chloe Fellerman, to have Polyester shown across Picturehouse Cinemas as part of Culture Shock – an initiative to show cult and genre films. The cards were sourced through Park Circus, the same distributor responsible for the ones at the Cannes screening.

Polyester will be shown in York as part of a month-long ‘celebration of cinema’ called Scalarama, which is now in its fourth year and sees a range of films shown across the nation.

The film follows a suburban housewife as she discovers that her pornographer husband has been cheating on her frequently, her daughter gets pregnant and her son is thought to be a foot fetishist who has become known for breaking local women’s feet.

Starring in this film were a number of actors often cast in Waters’ films including Divine as Francine Fishpaw, Edith Massey as Cuddles Kovinsky and Mink Stole as Sandra Sullivan. Joining them was former 50s teen heart-throb Tab Hunter as Todd Tomorrow.

Not only was this film a first for cinema but it was Waters’ mainstream cinema debut too, thanks to its R rating. In the past his films had either been unrated or rated X. It was also the first to be set in a middle class suburb of Baltimore rather than its slums.

After that, Waters went on to create such films as Pink Flamingos and the widely-loved musical Hairspray.

Polyester will show at 9pm at City Screen on September 10th and tickets can be booked by calling 08719025726 or visiting the Picturehouses website.