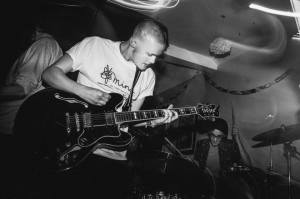 Bull will be headlining the CALM charity fundraiser.

Bull, TestTone3, Broken Skulls and Baby Tooth are playing a gig to raise money for the Campaign Against Living Miserably (CALM) at The Fulford Arms on May 30th.

Soundsphere magazine are hosting the gig and JUNK’s Estella Adeyeri will be representing the magazine, introducing each act and talking about CALM’s objectives.

York band Bull are known for their guitar-pop music, TestTone3 blend rock and electronica, Broken Skulls play rock and Baby Tooth are a psych-grunge act. The night will also see a DJ set from Basilica Hands.

Entry to the gig is free but a £3 donation is suggested to go towards maintaining CALM’s free helpline, which takes more than 2,500 calls each month. The money will also help CALM engage with local and national agencies to ensure mental health services are more accessible and effective.

CALM is a UK charity aimed at preventing male suicide, which is the biggest cause of death for men between the ages of 20 and 45 in England and Wales. The charity offers support, assistance and information to people who need it. It also aims to change cultural pressures that could attribute to male suicide, such as making men feel they must reach impossible standards or that they can’t ask for help.

Estella said it’s hard to say what exactly causes high suicide rates in males but added: “I think a huge part is the societal pressure exerted upon men to subscribe to narrow models of masculinity, where perhaps opening up and asking for help are not considered acceptable or ‘masculine’ behaviours.  Knowing where to access support if you are contemplating suicide is of such key importance, whilst knowing that you’re not alone or isolated in having these thoughts can make a huge difference. CALM have made so much progress in raising awareness and improving support strategies, and the more people are aware of them and their work, the better.”

The CALM charity fundraiser is on at The Fulford Arms on May 30th. Doors open at 19:30.