The Alchemist: a raucous romp 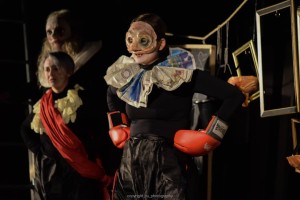 One of the few Renaissance plays still to enjoy continuing success on stage, The Alchemist follows a butler, Jeremy (Anna Rose James) who, upon being left home alone by his employer, transforms the house into his headquarters for a bizarre series of cons and schemes to make both himself, under the guise of Captain Face, and his fellow con(wo)men Subtle (James Swanton) and Dol (Helen Buchanan) marvelously rich. Seventeenth- and twenty-first-century critics alike have viewed Ben Jonson’s play as a deliberate antidote to the lofty and unrelatable Shakespeare plays about kings, queens and fairies. If you too are feeling a little tired of Shakespeare this year, The Alchemist, directed by Tom Straszewski, is both a breath of fresh air and a gasp of delight.

Strumming on a guitar, Buchanan stuns the audience immediately with her voice as the play begins; from start to finish, the cast are the jewel of Bronzehead Theatre’s production. While many modern actors would potentially be thrown off by the Renaissaince theatrical tradition of Commedia dell’arte, where most cast members wear (slightly terrifying) masks to represent exaggerated and farcical characters, this ensemble (completed by Claire Morley, Jess Murray and Bryan Heeley) have mastered physical theatre and bring their characters to life through movement and sound. James and Swanton shine in their roles as Face and Subtle respectively, changing voices and throwing on new disguises all while twisting their tongues around Early Modern English and bouncing around the stage with infectious bursts of energy. The Alchemist seems at once a Renaissance experience and a modern sitcom, with a colourful cast mastering the best of both.

Empty picture frames, props and buckets hang from the rafters of The Dogrose Theatre, tucked away up some rickety stairs next to The Golden Fleece. Just like the schemes thrown together by the characters, the stage and costumes are creative homemade concoctions, where latex gloves and broken lampshades become Jacobean ruffs and milk cartons hold mysterious potions. Transformation is the crux of both plot and stage design. The combination of the characters’ hastily donned disguises and the actors transforming picture frames into doorways and masks into characters is a visual and imaginative feast.

With a visible backstage area and actors fitting on masks or wrestling gloves before entering their scenes, the audience is both never in the dark and constantly guessing. In confronting the audience with stagecraft, theatre itself becomes one of the farcical ruses that the trio (almost) pull off. This isn’t always effective, as the inevitable pitfalls of a visible backstage are distracting throughout – whispered conversations and actors fiddling with props make the language even harder to follow. Seats on the right-hand side of the stage, closest the entrance, are recommended.

In a whirlwind of scrambling up ladders, shouting and guitar chords, a stream of lawyers, Anabaptists and toffs become “Despa-cheated” (yes, puns based on Luis Fonsi’s ‘Despacito’ do feature in Straszewski’s version) and the audience are left in fits of laughter. Whether you’re interested in the York International Shakespeare Festival to experience historic culture or you just want to have fun, The Alchemist proves that slapstick comedy, raw talent and a centuries-old script are a raucously loud recipe for success.

Read more about the company and get your tickets here.