Amanda Palmer ‘There Will Be No Intermission’: live music review 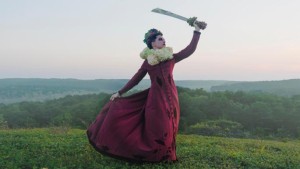 Amanda Palmer, There Will Be No Intermission

“I’m so happy I don’t have to do my show tonight,” breathes Amanda Palmer, the artist who makes no airs or graces about doing “exactly what the fuck you want”. Unflinching in her raw honesty, Palmer opens the evening’s entertainment with an acoustic ukulele serenade from the stage-left box, climbing out like Peter Pan and ambling, grinning, across the stage, taking in the room. She is here to live in the moment, because “the moment is real”.

Completely at ease with herself and her art, at this point in her career Palmer has now written hundreds of songs and performed for tens of thousands of people. She speaks between songs of how she views performing music as a service industry; she wants to give people what they want, she wants to make them (you) happy. Opening up the performance right from the beginning, she opts to take questions from the audience at various intervals in a set made up entirely of requests (including one of her own). She speaks honestly about her first abortion, and her experiences in advocacy surrounding abortion healthcare. We hear about her writing process and the inspiration behind certain songs, including Drowning in the Sound, an incredible response to her patron’s fears in the moments immediately following Donald Trump’s election, lit with meticulous creative effect throughout multiple shifts in pace and key. The Bed Song also strikes a chord with all those wishing to exorcise their demons on a cold English night in the narrative embrace of this international cult rock star and her beloved husband, Neil Gaiman.

Alone with a grand piano, she plays some old favourites including Oasis, Voicemail for Jill, A Mother’s Confession and Coin-Operated Boy, all of which make an appearance on the official set list but are called out from the auditorium to Palmer, who writes out the new set with a sharpie. Most excited to take a breath and make a connection with the room, at one point she has everyone on their feet singing the chorus, “At least the baby didn’t die” alongside her. She also riffs an update of Dear Daily Mail with a short-but-sharp Dear Late Late Show. Other enchanting moments include her response to a question about her favourite interaction with a child during her time as a street performer: that all children are fearlessly curious, and all her interactions with them in that guise were beautiful.

There may well be an intermission after all, but prepare yourself for a late night, because ours came around 10pm, leaving much of the audience clambering over one another throughout both halves to refresh themselves before noisily climbing back to their seats. Nevertheless, though coughing through an end-of-the-tour cold all night, Palmer’s vocal power and enthralling presence captivate the masses, and her musical talent and discipline are a potent, bewitching experience.

Amanda Palmer’s There Will Be No Intermission was performed at Grand Opera House York on Monday 4 November 2019, and continues on an international tour finishing in London; tickets and further information available here.