Hetty Feather: uniting generations through the wonder of theatre 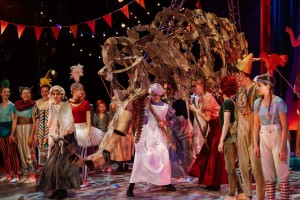 The cast of Hetty Feather, photo by Tom Arber

Our heroine Hetty (the very capable, long-standing Youth Theatre member Hannah Brown) is a boisterous redhead who gives her brothers a run for their money, growing up in an ever-rotating crowd of foster children eventually returned to the forbidding Foundling Hospital in Victorian London. Forming attachments where she can and daydreaming the rest, Hetty counts her losses but fights fiercely for the bonds she makes as she goes.

This aspect certainly fits Hetty’s ambitions of being absorbed into the warm bosom of the circus, and provides a nice opportunity for the cast to develop their performance skills, though this could be more smoothly integrated into the action to aid the sense of flow. There are however sequences that really do find the right balance of action, design and story to make Hetty Feather sing, such as the tragic train journeys to the Foundling Hospital, not to mention a musical number, “Roll up, roll up, you desperate mothers”, all too reminiscent of Victor Hugo’s Les Misérables’, especially with the echo of Jean Valjean’s number in Hetty’s.

With an overarching message of hope and strength in the face of adversity, this is a show that truly honours the works of the author, and unites young newcomers to her stories with their parents who grew up on them many years ago.