An Evening with Armistead Maupin: love and other things we’ve been doing since the seventies 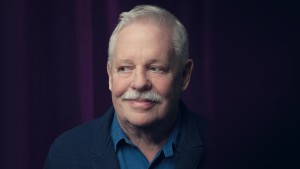 In his first ever UK tour, Fane Productions and Kilimanjaro present an evening with the bestselling, much-loved author and LGBTQ+ activist, Armistead Maupin.

Maupin has been blazing a trail through US popular culture since the 1970s, when his iconic and ground-breaking series Tales of the City was first published as a column in the San Francisco Chronicle. The series was then adapted – via Rock Hudson’s living room floor – into nine novels and has been taking the literary world by storm ever since; currently playing as a highly anticipated TV series on Netflix starring Laura Linney, Olympia Dukakis and Ellen Page.

A tentative, shy audience file in cautiously to the large auditorium of York’s Grand Opera House, a mixture of the young and open, and those who appear to have lived through the novels’ original era, all finding this new and temporary safe space in which to share their love, gratitude and curiosity surrounding this master storyteller. The music playing on entry feels very much like a mixtape that Anna Madrigal might sing along to through private tears and over a glass of something wicked, including subdued gems like Joni Mitchell’s Case of You, Carly Simon’s You’re So Vain and 4 Non Blondes’ What’s Up?, repeated throughout the interval and after the show for an authentic late-night-record-scratch effect. Blue backlighting and pink armchairs nod to queer community flag colours, contributing to the feel of closeted bedroom karaoke. This is an intimate gathering.

Hosted by Claire Armitstead, Associate Editor of Culture for the Guardian, the beloved author appears to a warm welcome and proceeds to share his generous, self-deflecting, observational tales of life, love, sex and queer politics that he is known for. When asked which of his characters he is most like, Maupin replies, “I’ve always been all of ’em, one way or another.” He discusses how he writes about the world, through his own sensibility, which seems as obvious and innate to him as breathing. Having seen his role model in his Suffragist grandmother from Derby, Maupin moulded perhaps his most sympathetic and generous character, Anna Madrigal, on her spirit. Reconnecting with his English roots, having now migrated to London, he views the Tales of the City series as “a British village novel”, to which his interviewer retorts, “There are more than one gay in that village!”

At one point writing 800 words a day, five days a week, Maupin created an avalanche of new characters, amusing and testing his colleagues at the press with asserting which sexual orientation column each belong to on a wall chart. Acknowledging that time has certainly moved on from the intrinsic and extrinsic settings of the novels, he purports that the recent Netflix adaptation deals more with inter-generational conflict, particularly noting a powerful dinner table scene inserted by the writers team in which the viewer’s sympathy shifts between the characters as they open up a new perspective on the issue of terminology and how we progress alongside each other. There is a heavy focus on the weight that the older generation carry with them from the AIDS crisis and their feeling of entitlement to some let-up, though not much said about how that lived experience impacts on the language we all use to identify each other and why your sympathy should also lie with the younger character attempting to school them, although this seems like a clear cause. As he says himself when clambering over pronouns later, “I’m learning.” And we all are, all the time. “We’re here to learn about each other. You don’t have to keep up, dear, you just have to keep open.”

Mingling between humorous memories of local ministers proudly displaying their “room of cocks”, subtle self-declaration via Fairy soap posters on his childhood bedroom walls, and Ian McKellen describing him as “my gay godfather” (despite being five years his senior), Maupin weaves together an evening talk that is as gentle, vulnerable and wild as his works. He talks about camp as a subversive, clowning exercise as opposed to the catty, oppressive side of the subculture, praises mother figures like Anna and the house mothers in POSE, and fondly recounts how Mouse’s ‘Letter to Mama’ has brought several well-established gay actors to tears. Reading an excerpt from his memoir Logical Family about his last visit to his grandmother, he is hard-pushed not to do the same here. Indeed, it prompted a renewed sharing of this text among the community after the event.

Full of eye-opening experiences like the true gender identity of E.T., witnessing street harassment of his friends, travelling on a train full of A-Listers to Bolton to throw a surprise birthday party for Ian McKellen, Maupin also brings the energy back to ground level regularly, revelling in the everyday comforts and rewards of his relationships as they are now. His partner Chris and dog Philo make a little cameo, much to everyone’s delight, and we hear about Maupin’s journey of discovery with regards to the relationship between monogamy and fidelity, and that between love and sex. Having found his way to a place of acceptance and understanding on how these work for him, he provides a wonderful role model much needed in a divided, ever-changing world.

Don’t miss this chance to join America’s ultimate storyteller, finally on British turf. Armistead Maupin is the gay godfather we all deserve.

An Evening with Armistead Maupin continues on its UK tour; further information and tickets available here.