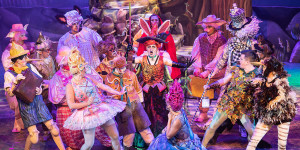 Based on the story and characters from the Oscar-winning DreamWorks Animation film, York finally gets its premiere of this uproarious, spectacular production that turns the world of fairy tales upside down in a raucous road-trip musical comedy.

Adventure, laughter and romance ensue. The production is directed and choreographed by West End Yorkshireman Damien Poole, who worked on Shrek the Musical for two years when it first transferred from Broadway to the UK, bringing with it the jaw-dropping set, costume and puppet design by Tim Hatley and dragon design by Michael Curry. The stellar cast more than live up to these heady production values with incredible voices and performances easily matching that of the original star-studded cast.

The problematic second-wave feminism of the original story remains; with body-shaming humour weaved in alongside encouragement to Let Your Freak Flag Fly. However, there is no denying the talent that oozes from the stage like the synchronised swamp-fog farts, and the joyful abandon of revelling in what can be considered our flaws is readily taken up by the audience. Highlights include Ramsden’s soulful Donkey Pot Pie and Bell’s hilarious Morning Person. If you want to see some West End quality musical theatre in York, this is your chance.