A Gaggle of Saints and Disco Pigs mix order and chaos 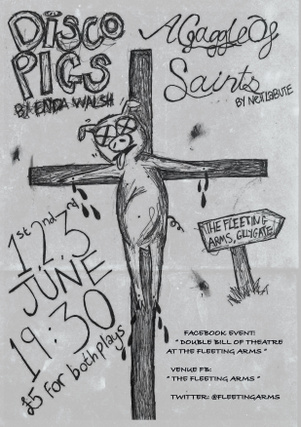 Disco Pigs and A Gaggle of Saints make up this double bill of theatre.

Amusement, unease and intrigue are a few of the feelings you get from Sean Richards’ and Tom Leatherbarrow’s productions of Neil LaBute’s A Gaggle of Saints and Enda Walsh’s Disco Pigs.

The two plays are on at The Fleeting Arms, back to back, until June 3rd. A Gaggle of Saints is the first, which sees a young Mormon couple, John and Sue, relay the story of their anniversary weekend in New York where, unbeknownst to Sue, John commits violent acts. Disco Pigs is a coming of age tale where two Irish teenagers, Pig and Runt, see a change in their relationship when they turn 17.

Guests are ushered into a dimly lit room, where they look to a stage that is adorned with canvasses painted grey, hung at jaunty angles. It’s such a seemingly simple idea but so fitting for both plays – the pared-back look is in-keeping with this style of theatre, while the grey shades work well with the everyday feel of the plots.

A Gaggle of Saints

In A Gaggle of Saints, a smartly-dressed Sue (Zoe Biles) and John (Oliver Patrick-Henn) sit facing the audience, about a metre apart. As they relay their story to you, they quickly make you feel comfortable. They look into audience members’ eyes, making you like them and feel that you’re part of their lives.

Yet, as John begins to talk unapologetically – perhaps proudly – about his violence, you find yourself torn. You want to like this player who has been speaking so nicely to you but you feel you can’t, knowing what he has done. Meanwhile, Sue’s innocence draws you closer to her but you wonder if she secretly knows and turns a blind eye to John’s actions.

The acting and the directing are both very clever at playing on the audience’s feelings well – the characters seem real to you and, in their stories, you can really feel the tension.

It’s a play that gets you thinking. On first thought, you hear of John’s most stand-out violent act and you wonder if it’s just sensationalism that had been shoe-horned in. Yet, after thinking about it, you remember the signs that you first missed – such as when John talks about fighting with Sue’s ex-boyfriend – and you realise that his potential to do what he did was always there. 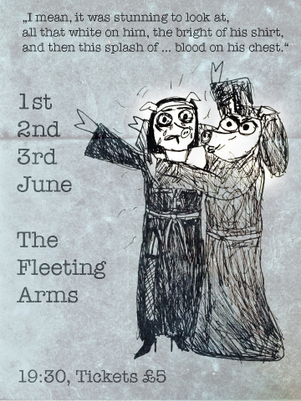 Both plays are showing, back to back, at The Fleeting Arms.

Disco Pigs has a more chaotic feel. Pig (Ant Noonan) and Runt (Kate Burke) burst on stage, act out their own births and continue to cavort around with childish energy – their actions making you picture the invisible setting and people they meet.

Unlike the composed nature of Sue and John in A Gaggle of Saints, Pig and Runt in Disco Pigs are far more lively. The play uses stage props and music more frequently to create the illusion of a vibrant teenage world.

Noonan’s shouting and jerky actions are what you would expect from a teenage boy with pent up rage and sexual tension, while Burke’s high-pitched voice and childish movements are typical of a seemingly sweet teenage girl, amazed by the world she is discovering. Of course, that’s aside from the fact that she argues with her mum and starts fights in night clubs.

Indeed, the acting is crucial for keeping you up to speed with what’s going on at times. The script can be confusing in parts because of the high use of colloquialism and metaphor. In parts you wonder what’s going on – if anything, since it is a play about teenagers’ everyday lives. Yet this confusing language is part of the connection between Pig and Runt, reminding you that only they are allowed into their world. But when distance begins to emerge between them, Runt’s lines, in particular, become noticeably clearer as she begins to embrace the world beyond what she previously knew.