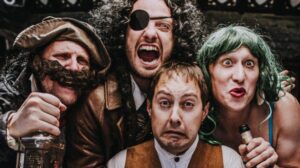 Bristol-based writer-director John Nicholson of Peepolykus (The Hound of the Baskervilles, The Massive Tragedy of Madame Bovary) provides the framework for this seventh collaboration with the Bete crew (Al Dunn, Matt Freeman, Dan Bianchi and Nick Bunt). Devon-based designer Fi Russell lays an ingenious and versatile set upon which the troupe traverse their adventure with ease. Composer Peter Coyte’s original score builds on a soundtrack interspersed with comic takes on popular songs.

The company’s small but skilled ensemble present another multi-roleing feat, lighting up the epic, escapist coming-of-age classic with their unique flair for utter silliness. It would sorely undercut the show and its gleeful surprises to list every pun and visual gag – suffice to say it tickles from start to finish, with interjections from gameshows, pop songs and iconic TV characters.

Lighting, puppetry and music are used to great effect, relishing in the magic of theatrical craft. The fight choreography and live songs are somewhat seasick, but they’re forgiven quickly as the story surges forth. One particularly impressive skit that arrives with no warning on the horizon is a wordplay quickstep akin to the Two Ronnies’ ‘Fork Handles’, soon thrown overboard like its subjects to make way for the next joke. No rest for the wicked, but the journey is a real treat.

The show is stated as suitable for 7+ years, and it has something for all ages. Follow the Jolly… well, it rhymes with Rodger… on tour here.