Fences and dirt: The Bone Sparrow 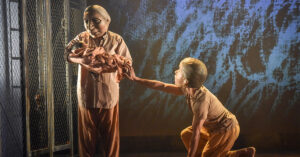 Jummy Faruq as Anka and Devesh Kishore as Oto, Photo by Robert Day

Subhi is a refugee. Born in an Australian permanent detention centre after his mother fled the violence of a distant homeland, life behind the fences is all he has ever known. But as he grows, his imagination gets bigger too, until it is bursting at the limits of his world. One night, Jimmie, a scruffy, impatient girl appears from the other side of the wires, and brings a notebook written by the mother she lost. Unable to read it, she relies on Subhi to unravel her own family’s mysterious and moving history. Subhi and Jimmie might both find a way to freedom, as their tales unfold, commanding them to be brave and to break through boundaries within and outside themselves.

“It’s important what story you choose to tell.”

The Bone Sparrow is the third co-production between Pilot Theatre, Derby Theatre, Belgrade Theatre Coventry, Mercury Theatre Colchester, and York Theatre Royal who formed a new partnership to develop theatre for younger audiences. From 2019-2023 the consortium is commissioning and co-producing an original mid-scale production each year. Each production will play in all the consortium venues as well as touring nationally. Schools’ workshops and outreach projects, along with free digital learning resources, will be available alongside each of the productions.

The consortium’s previous productions were Crongton Knights and Noughts & Crosses, for which Pilot Theatre won Excellence in Touring at the 2019 UK Theatre Awards. The production has also been developed in association with ATYP (Australian Theatre for Young People) and with the support of Bradford’s SBC Theatre, a group of creative professionals and artists who are committed to making work with, about and for those seeking sanctuary in the UK and internationally.

“So often we are beaten down by the world. We reshape ourselves to fit into it. Subhi’s story is different. In The Bone Sparrow this imaginative young boy discovers within himself a strength that will change the world around him. It is a classic coming of age story: and yet, so much more. The Bone Sparrow is by turns a wondrous tale of epic, mythical adventure; a realistic appraisal of what it means to grow up without freedom; and a vision of renewed solidarity across our supposed divisions. I have had a great deal of fun collaborating with Pilot to develop a grand theatricality for this work and deepen its relationship with the Rohingya community. I hope audiences are as delighted and moved by this story as we were in the process of adapting it.”

The stage craft of the ‘epic, mythical adventure’ through projection and puppetry elevates Subhi’s withdrawal into escapism, in discordance with his mother’s depression and his sister’s anger, each of the family processing their trauma and loss in disparate and lonely ways, while the ensemble choreography brings home the message that we are inextricably linked to one another, our feelings and actions rippling through humanity. “He was supposed to be born free,” cries Subhi’s mother when she goes into labour in the detention centre, painting his whole existence with tension and tragedy.

The Bone Sparrow juxtaposes this life fraught with pain against the most innocent of joys: young friends drawing animal tattoos on each other’s arms, spinning constellations of donkeys and dragons and making plans to be “hot chocolate chefs”. It carries the gravitas of a child who is forced to grow up too soon, who is dragged into adult concepts and responsibilities in the cruelest of ways. It’s a show of great spiritual maturity and adeptness, deploying both breathtaking visuals and the most unassuming lines, tapping into all different levels of emotional consciousness. Those with lived experience of or connection to the story’s events may find it a tough watch, though it does do admirable work to speak to an audience without that. There are so many sobering moments clouding the brief escapes, and even at Subhi’s ‘safe’ ending, he has difficult decisions to make about what truths survive with him.

The Bone Sparrow is touring until 23 April. Tickets and further information here.