Theatre Mill’s Witness for the Prosecution: Enchanting and immersive 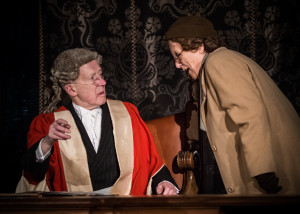 Too-nice prime suspect Leonard Vole (Niall Costigan) is charged with the murder of an older woman he has recently befriended. His alibi is an unlikely one, but for the fact that he is “just not the sort”, and his wife Romaine’s (Rachel Logan) presentation is equally unconvincing. Such is the precarious case for defence solicitor Mr Mayhew (Adam Elms) and barrister Sir Wilfrid Robarts, Q.C. (Gordon Kane), at the onset of a case that unravels with as many twists and turns as one could hope for from the Queen of Crime – aptly described by Director Samuel Wood as “exquisitely deceptive”.

Greeted at the door by a fastidious policeman, we step into a hypnotic 1953 legal Narnia, surrounded by secretaries and stewards all busy in their various roles; typing correspondence, guiding us into our seats in the council chamber, giving us austere looks for disrupting the work of serious people and for appearing so light-hearted in the lobby of a court of law. This production began its run at York Guildhall before coming to Leeds, seeing a first foray into the world of theatre for both sets of council chambers, and what better time than the 125th anniversary of Christie’s birth. 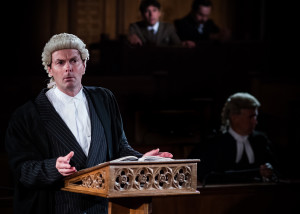 Witness For The Prosecution came to York Guildhall before heading to Leeds Civic Hall.

The vast council chamber is lit for a dream sequence, enraptured audience wondering wide-eyed to their seats accompanied by a soundtrack of swooning, swaying female voices. Court clerks and foremen flurry, reporters muscle into the good seats to catch the details, and we settle into a romanticised vision of the 1950s court building. Dramatic montage transitions serve to maintain the intense atmosphere throughout.

The winning element of the formula to Theatre Mill’s productions is the engagement of the audience as complicit participants; we cannot help but embroil ourselves in the undoing of the web of lies alongside Mayhew and Robarts. We are addressed as jury members throughout, encouraged to forget all we know from the media, and focus on the facts presented in court. We rise for the judge’s entrance and exit, and follow keenly the integrity of each witness under cross-examination.

The chemistry between Elms and Kane, and with secretary Greta (Lowenna Melrose) – clearly a direct ancestor of Father Ted’s Mrs Doyle – is captivating, and sets up the comic value of the rest of the cast’s idiosyncrasies through their own reactions. All this and an impressive, multi-roling supporting cast combined with Natalie Roe’s rich design and Andy Pilliner’s lighting makes for a mesmerising piece of theatre.