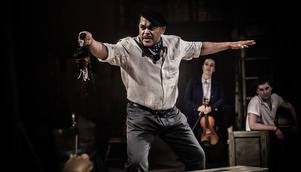 Theatre Mill, with the direction of Gareth Tudor Price, cross the high seas to a Hull pub, via York Guildhall, for John Godber and Nick Lane’s adaptation of the classic story of Moby Dick.

Clay-faced sailors advise us of our journey’s weekly cost before ushering us into a driftwood arena complete with mobile bar. Captain’s barrel tables dot the stage, ladders and oars lean against the majestic historical pillars of the Guildhall. Graham Kirk’s design is a sight to behold, making up for the lack of – spoiler alert – any actual appearance of the mythical whale from the novel.

Strings of lanterns and soft lightbulbs line the heights of the great hall, dropping a nostalgic veil over the decks of the Pequod for this adaptation of the tale of bloody-minded revenge.

While visually stunning, the text falls short of delivering the right build of tension – characters remain on a level throughout the story, without an initial sense of camaraderie to serve the payoff of Ahab’s fatal determination, or any real character development. Ahab is gnarled and feared from the first; the crew wary, the storytelling a little too knowing of its fate.

The framework is a relocation to a deserted Hull pub – a setting which seems to suit the home comforts of the company more than the adventurous thrill of the story. An entirely new set of characters from another era relate their own stories tenuously linked to the main arc, which leaves those unfamiliar with it a bit adrift. The sense of grandeur and adventure are missing and the climax low-key, despite the lofty surroundings and Joshua Goodman’s beautiful soundtrack. Actors hop from one character and locale to another adeptly, although rarely engaging with convincing emotion as they’re too busy telling the story.

There are, however, some touching moments. These include the breaking of Pip’s spirit, all greatly augmented with live music played by the lead storyteller, and Queequeg is endearing throughout. It must also be noted that the choreography capably avoids the in-the-round curse of forgotten angles, and does rather swim.