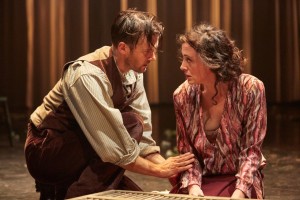 Constance (Hedydd Dylan) and Clifford (Eugene O’Hare) Chatterley are a connected couple. They match, they make sense, they communicate. From the first appearance, Constance’s marital duty weighs visibly on her. She is resigned, dignified and practical. Despite their fresh physical hurdles, her intimacy with Clifford is established immediately through the tender and knowing handling of daily ablutions and conversation; this is not a marriage one would foresee breaking down. Clifford is ostensibly progressive and accepting, raising the suggestion himself that Constance should take a lover, or indeed do whatever is necessary to maintain her own emotional well-being, so their marriage can survive.

Inevitably, there are unspoken stipulations attached to the contract, which are the undoing of Clifford, both for himself and for the audience.

Away then from the restrictions and disclaimers of the Chatterleys’ household and into the freedom of their grounds – a borderless Eden in which Constance and groundskeeper Mellors (Jonah Russell) share everything as innocents – at first a stuttering physical connection, later their full hearts and promises.

Laura Hopkins’ design complements the emotional subtlety of the tale beautifully; flowers, water and projection are used to magical effect. The play opens with Constance moving among neglected furniture covered with dustsheets, fronting darker depths of the stage reigned off with a simple white curtain that is later drawn open to reveal more private quarters of Mellors’ home and heart. David Osmond’s piano playing also enhances the delicacy of the piece. Natasha Chivers’ golden hour lighting provides a perfectly stifling yet hopeful atmosphere for this story of impossible love overwhelmed by societal pressures and spiritual expectations. The looming shadow behind Constance’s first moment of nudity serves to heighten the complex blend of vulnerability and responsibility, while streams of running water like glittering thread melt any sense of wrong-doing in the lovers’ domain.

The working-vs-upper-classes thread is the weaker link, with fight sequences proving too cautious to pack any punch, although the power of the divide is felt sorely in sympathy for Constance’s dreams of her future with Mellors. There is a small sense of trouble to come in the prowess of Mellors’ arrival, although his presence lacks weight after this point with the dynamic being carried by Dylan.