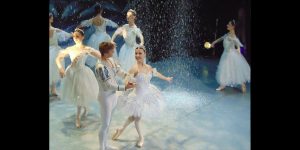 Presented in the traditional style of a gouache Victorian Christmas card, Vienna Festival Ballet’s The Nutcracker fills the stage in York’s Grand Opera House with the height of Caucasian kitsch.

First performed in 1892, though only widely beloved since the 1960s, the ballet follows Clara, who is given a wooden nutcracker as a Christmas present by Dr. Drosselmeyer. During the Christmas party, Clara and her brother Fritz fight over the nutcracker doll. Later, Clara, unable to sleep with excitement, goes searching for the doll and then falls asleep under the Christmas tree. As midnight strikes she awakes to dreams of giant mice, soldiers, battles, enchanted forests and a Kingdom of Sweets.

Artistic Director Peter Mallek takes no risks with this saccharine classic, indulging its lightness of heart and taming the choreography to fit its tour venues – though not so much that the dancers don’t fall foul of the smaller space, the Russian Dancer soloist ending up too far forward to make his expected swift exit.

For the most part, the spirit of comforting escapist magic shines through the ebullient faces of the young cast, although the pas de deux between the Sugar Plum Fairy and Prince Coqueluche is palpably tense for its mismatching of strength and ability – you can practically taste the prince’s sweat and the fairy’s gritted teeth. Being held aloft simply shouldn’t feel like this much work. Given the constant flourishes demanding applause throughout simpler sequences, it is a crime to neglect this piece.

The production upholds fidelity to the discomforting adult-child dynamics and flagrant cultural appropriation of this established favourite, without stirring the intended childlike feeling of wonder so desperately declared. It would do better to relax into showing us its heart instead of telling us it has one.