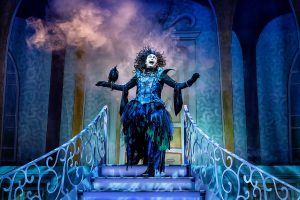 York Theatre Royal’s pantomime dame retired last year after 40 years of extraordinary success. Given what Berwick Kayler’s panto must have brought to the theatre’s coffers, I’d imagined this loss sparking a panicky but exciting meeting, with acres of sugar paper dedicated to mapping out the fresh start. How to sell loyal fans a new dame?

Keep tradition alive while creating something new? Perhaps address the aspects of panto looking problematic in 2019; there’s only one female actor, who never gets any good jokes, maybe now’s the time to change that? Are we still going to teach audiences of children that a man in a dress is inherently funny? Storylines like ‘man kisses woman while she’s unconscious and woman is grateful’ – can we be a little smarter?

It’s a difficult brief, and you can understand why it felt easier to just have Kaler write this year’s show too. Unfortunately this results in a panto identical to pantos past, but with a Berwick Kaler shaped hole. (Berwick actually makes multiple, increasingly indulgent script and screen appearances; pity audience members who don’t know who he is).
The comedy sidekick character usually played by Martin Barrass is just as great a loss to the show, and the treatment of this actor is particularly disappointing. The obvious choice for a dame replacement, Barrass’s Queen Ariadne sports fabulous dresses and you’d have to call him the dame if there was one on stage, but with two other male actors dressing as women to far more spectacular lighting and sound effects, his role becomes rather confused. Jokes so weak they are unrecognisable don’t help his cause; lines like, “Is that the Eiffel Tower?” “Yes, it’s a bit of an Eiffel isn’t it?” making the accompanying ‘ba dum, chish!’ sound effects seem more desperate than comedic as they reverberate around the silent theatre.
The first half is like watching Eddie Izzard perform Billy Connolly’s material; the problem isn’t that the content is bad – although it isn’t good – but that no one on stage owns the show. The knowing winks and ludicrous mistakes that define the Theatre Royal pantos are missing. A crime given the talent on the stage.
The second act’s opening number allows legendary baddie David Leonard to take control of the show, and the audience to start enjoying themselves. Cynical quips criticising panto clichés are laugh out loud funny and as self-aware as the whole show should be. Newcomer Howie Michaels shines as Punky the Flunky – what a voice – and the exceptional child actors steal the show, though the writing lets them down too, the punchline of their scene essentially a man telling his wife to “pipe down woman”. Much of what sets the York Theatre Royal pantomime apart from the rest is still here: the energetic performances, stunning costumes and technical expertise. Time to have that meeting and work out how to use them to their full advantage.
Sleeping Beauty runs at York Theatre Royal until Saturday 25 January 2020, tickets available here.
Tagged fairy tales, family, pantomime, Sleeping Beauty, York Theatre Royal. Bookmark the permalink.