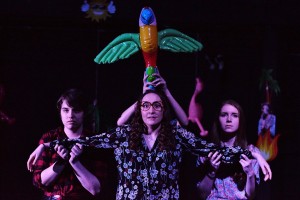 Open Barn Productions presents Something Else

Emma Holtom, Chloe Payne and Sophie Lorraine Parkin line the black box platform stage as the Maras, a trio of unpredictable energies ostensibly acting as one synonymous entity. Each takes a stance mimicking the Wii Fit menu and pause screens, with gestural choreography and music perfectly capturing the inane, ongoing, ‘harmless’ calm intended on the console, sending up its babying tone. They toy with inflatable palm trees and a hand-puppet penguin. Hints to elements of this same user experience spot the action throughout: at various moments, the Maras surround their service-users, holding up the uncomfortably familiar penguin and humming, giving the impression of the ‘thinking’ the Wii board does during a body test, which leaves Pete recharged and Maggie destroyed.

Robyn Aitchison and Filip Gesse play Maggie and Pete respectively, the pensioner couple who appear to be visiting a resort staffed by the Maras, or rather, Mara, although later scenes divulge enough of a sentiment, if not in words, that maybe they are in a kind of limbo, and all is not as it seems. Even what it seems is baffling; consistently surprising and inexplicable, while utterly captivating. Strong parallels with David Lynch’s Mullholland Drive and the platform video game Limbo paint a purgatory of the characters’ own making, and Maggie admits that she believes this is all her fault. How exactly remains for us to wonder.

Written and directed by Miller, the show is airtight and the performances keen, so that despite the dialogue often eluding logic, the Berkoffian movement and emotion behind each thought is expertly executed and the impact is palpable. There is a sense of something dark and violent behind the clenched grins and sharp switches of role in Mara; benign servitude swapped out for growling threat with the click of a heel.

“Hold me closer and I feel no pain”

The play is riddled with poignantly haunting images, from Pete’s unbelievably charged hula-hipping almost-touch with Mara Fleur (Parkin) to Maggie’s simple, vulnerable talent show rendition of Islands in the Stream, which builds into a duet with Pete, the pair dancing in each other’s arms until the nostalgia fades and the rules of their fraught greenhouse dream are broken. The cast and writer-director are incredibly in tune, and the effect is potent. Littered with unsettling thoughts discarded casually to maintain status quo, or put off facing the inevitable, such as Maggie’s questioning of why Mara needs her picture, and Mara’s hatefully upbeat “Just drink more water!”, “Poor, complicit Maggie…” Something Else will really get under your skin.

Something Else continues on to Edinburgh Fringe Festival, tickets and further information available here.