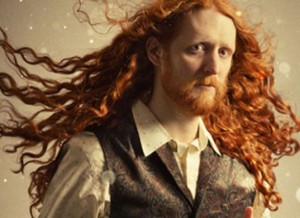 Alasdair Beckett-King (or The Interdimensional ABK as he likes to go by over the course of his show) brings his Edinburgh Preview Show to the Great Yorkshire Fringe, and this timeline is all the better for it. Alasdair hails from the A timeline and he has come to the B timeline, where we poor mortals reside, to share what he has learned.

To say the world today is something of a messy place would be a grand understatement and this is how Alasdair frames his show, as a curious tourist trying to find a way to understand our societal ills. In doing so he covers everything from patriotism and bullying, to abridged Shakespeare and poorly considered murder mysteries.

The show begins with a glorious animated title sequence created by Alasdair himself before launching into an explanation of the difference between his timeline and ours. In his, the world is only getting better, whereas in ours, things just seem to be getting worse. It is in this whimsical examination of entropy that Alasdair mines a wonderfully left field range of inequities. This is assisted by a delightful range of graphics and animations to further illustrate his point, including more accurate film titles and the absolute nuttiness of the remaining C-Z timelines.

Lesser comics would struggle to weave such a disparate range of ideas together, but Alasdair’s imagination and playful yet knowing style deliver it all with ease. Highlights include a painfully accurate takedown of the shortcomings of theatre, Winston Churchill’s cover of the band Queen and the ignominy of train toilets. And while it could be easy for such subject matter to leave a sour taste with a focus on everything that is not quite right in this world, Alasdair capably brings it home with the simple but undeniable truth that inertia is not unstoppable, not so long as kindness remains.

If you’re headed to the Fringe, be sure to make a visit to his dimension.

Alasdair Beckett-King continues on a UK tour culminating in a run at Edinburgh Fringe, tickets and further information available here.