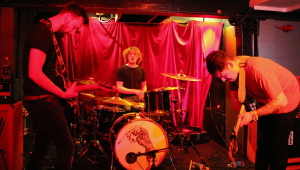 Polymath headlining at The Basement.

With every act, the music got crazier, the array of pedals got wider and the atmosphere got bigger when Possum, Civil Protection, Lost in the Riots and Polymath descended on The Basement.

Local trio Possum kicked off the night with their blend of alternative rock crossed with shoegaze. Their lyrics and vocal melodies are reminiscent of rock bands from around the middle of the last decade, yet is punctuated with innovative effects and riffs. Despite being a relatively new act, their songs are well polished and we expect to see them cropping up at plenty more gigs in York in the future.

Next up was Civil Protection, an instrumental rock band whose members hail from York and Huddersfield. Their music seems to be all about the layers, carefully constructed between their three guitarists, bassist and drummer. A big atmosphere characterises each of their songs and they effortlessly move between time signatures and sounds to create different feelings – sometimes completely changing the song. Fans of acts like Explosions in the Sky and 65daysofstatic are likely to enjoy this band a lot.

Lost in the Riots were the second to last band of the night. They took the road up to York from the south-east as part of their UK-wide tour with Brighton’s Polymath and it seems they are one unusually upbeat post-rock band – in a good way. Lost in the Riots supported their happy-sounding music with their energetic performance, with bassist Robbie Parmenter jumping all over the stage. 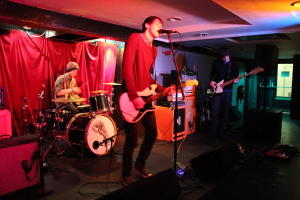 York-based refer to themselves as Possum ‘atmospheroc alt rock’.

As the name suggests, the order of the day in a Polymath’s set was: math. Guitarist Tim Walters and bassist Joe Branton stepped out on stage and laid their mass of pedals down, facing each other as if about to start a battle of sound – with drummer Chris Woollison acting as referee. The three-piece threw down layer upon layer of riffs and loops, peppered by effects. While watching the act and getting absorbed by the atmosphere that they create, you may find yourself transfixed by their energy on stage; particularly as you watch Joe’s robot-like but energetic dancing.

Lost in the Riots and Polymath are taking their tour to Europe at the moment but we hope to see them back in York in the future. In the meantime, it’s great to have Civil Protection and Possum here to give the city a well-crafted post-rock injection.