Once the Musical: diasporic love raises its hopeful voice 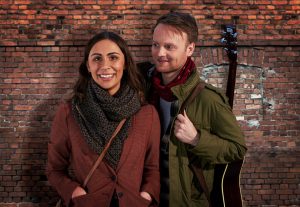 Emma Lucia and Daniel Healy in Once

Based on the cult 2006 Irish indie feature, Once tells the uplifting, yearning story of a part-time Dublin guitarist busker (dayjobbing in his dad’s hoover repair shop) who falls unexpectedly in love with a fellow musician. Spanning their fleeting chance connection across five short days, the story sees big changes happen to both of them in little ways.

Now a Broadway and West End hit musical, Once is enchanting in its bittersweet capture of the grey areas of love, attraction and friendship.

Celebrating Glen Hansard and Markéta Irglová’s original score of Irish-inflected songs, the atmosphere of this production directed by Peter Rowe is that of an aching romance intertwined with a trad session. The music, played live by the fifteen-strong ensemble cast, is beautiful and rousing, and incredibly accomplished. Let your first experience of this tale be live, because watching a DVD alone in your living room just doesn’t compare to the impact of seeing the performers singing their hearts out in the room with you.

Given the full stage musical makeover, the show features a stunning full pub band platform set (designed by Libby Watson) and all the comedic trope spins on characters that one might expect. Often this lands comfortingly, although there are a trans-homophobic quip or two that date before they’re even uttered. In this era, they are pretty tired, and one would be right to expect more from companies producing work now, even when the setting is historical. Which is to say nothing of the scene in which a benevolent friend calls the Guy a ‘love thief’ and gives him instructions on how to “calm down” and not force himself upon a woman, which, perpetuating the idea that women are objects owed to men who have waited their ‘turn’, do little but reinforce the Entitled Nice Guy(™) trope and encourage you to root for the hero even if the heroine has said outright that what she wants romantically is her husband. While the Guy’s pushy affections are somewhat shelved, you can still lose yourself in the power of one person turning life around for another with simple acts of nurture.

Mark Dymock’s lighting design and James Cook’s sound design compliment the story deftly, cushioning each moment like tender pearls forming in a vast ocean of human encounters, adding to the raw delicacy that the characters offer generously to one another. Peter Hazelwood’s projection of Czech and English subtitles during certain scenes added sensitive depth to the action, and made bold some of the pair’s dynamic that remains more unsaid in the original film.

It’s an unusual and uniquely affecting concept album of a musical; showcasing the hopeful daydream spontaneity in its characters’ vitality, while poignantly emotionally precise in the understated air of longing that anyone who has ever been in love or lost themselves will recognise instantly. Its Achilles heels are some uncomfortable accents, underwhelming dialogue that reserves its poetic punch until the last, and the Girl’s exaggerated Manic Pixie Dream Girl energy. But the soulful musical performances and the chemistry between the protagonists overcome all these vices to create an experience infused with passion, pain and acute emotional intelligence. In post-Brexit uncertainty, this diasporic love story lands with perfect timing.

Once is playing at the Grand Opera House York until Saturday 8 February 2020, tickets available here.