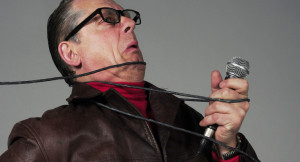 When John Shuttleworth last toured in 2017, he was on the brink of retirement.  2016 had wreaked its deathly toll on major celebrities (Rickman, Bowie, Wogan et al.) and Shuttleworth was feeling grimly vulnerable to the reaper’s scythe.  We all thought he was packing it all in, that the superstardom he’d always imagined was tantalisingly just out of reach would never be his.

However, rumours that Shuttleworth might return to the stage were fuelled when he made an appearance at the Edinburgh Fringe show and subsequent tour of comic mastermind Graham Fellows last year, and the ecstatic welcome Shuttleworth received has no doubt spurred him on.

So it’s a huge relief to his multitude of shed dwelling fans that John Shuttleworth’s Back – the title of his new show suggesting that the spark of his dream is gloriously reignited – or perhaps, more prosaically, decades stooped behind his Yamaha PSS portable keyboard have finally taken their toll and he will regale us with tales of lumbago and sciatica.  If the latter, who are we to argue with his professionalism? Maybe he is hoping that ticket sales, (always supposing that his “next-door neighbour and sole agent”, Ken Worthington, has finally secured a lucrative deal) and that advanced copies of his new book, TWO MARGARINES and other Domestic Dilemmas, will pay for a decent lumbar support and maybe the services of a semi-professional chiropractor.

John Shuttleworth’s Back! will be playing on Friday 31 January and Saturday 1 February 2020 at City Varieties Leeds, tickets and further information available here.