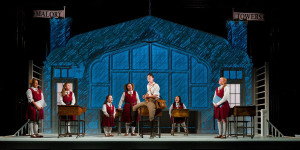 The cast of Malory Towers, photo by Steve Tanner

Where to begin? The present: to a mixture of current and nineties pop songs, this year’s bad guys assemble outside the Head Teacher’s office in a British secondary school. Quickly, character traits and dynamics are established before a pair of girls fighting over a diary sends one into unconsciousness, starting off this adaptation of Malory Towers with an Oz-like dream framework.

The nostalgic embrace of the show doesn’t stop with this reference. From the joyful Hogwarts-esque first journey to the school, to Bill’s Pan-esque comings and goings via the window, Wise Children put their magical spin on Enid Blyton’s old tale of female-centred friendship and derring-do. The very heart of the thing is driven deeper, in Director Emma Rice’s diverse and inclusive cast spanning race, figure and gender.

The cast are mostly new to the company, unusually for Rice’s historic leaning toward working with an established ensemble, comprising a younger intake of initiates with all the bursting charm and dynamism that long-time fans will anticipate. Izuka Hoyle is Darrell Rivers, the Gryffindor mouthpiece for justice with a fiery temper; Vinnie Heaven is The Right Honorable Bill Robinson, a gentle soul on a journey of self-discovery who wins hearts in a breath and cares deeply for their horse Thunder; Francesca Mills is Sally Hope, a delightfully straight-laced Peter Quince type who plays by the book; Rose Shalloo is the comedic Mary Lou Atkinson, a timid and loyal friend; Renée Lamb is the excitable, clowning Alicia Johns who stays behind a year perhaps through generous ambassadorship but perhaps not so much through choice; Mirabelle Gremaud is free spirit and harpist extradordinaire Irene Dupont; and Rebecca Collingwood is Gwendoline Lacey, a manipulative horror with painful secrets.

Investing in our relationship between the present and the past, Rice brings the story up to date in her treatment of these characters, all gorgeously sympathetic and tenderly realised. The show is dedicated to her own mother, and celebrates the power of being “a woman the world can lean on”, as the Head of Malory Towers Miss Grayling also advocates in her opening assembly. The gang are all the better for each other’s company, putting aside competition and spite to make way for kindness and skill-sharing. Rice talks in her podcast Wise Children’s Detention about the pertinence of telling a story now about radical kindness. While we are fielding potent fresh guises for old insults, like ‘snowflake’, how much more daring then to be striving for good. The lullaby that the girls and Bill sing to Gwendoline as they help her pack to return home is almost overwhelming in its volume of love, unrelenting love in the face of anger and fear.

Making aspirational heartthrobs of Bill and Darrell without falling into sexualisation of these twelve-year-old pupils, the play showcases just how open and powerful ‘girl power’ can be, and hints at just how much weight might be put upon them even during their time in school, if the cost of war to Gwendoline’s family is anything to go by. This celebration of nurturing extends to the creative team, the aesthetic having been informed by the continual developments in the rehearsal room and vice versa. A generous, lively and melodic score by Ian Ross accentuates the talents of the cast and the tone of the characters’ friendships perfectly, aided by beautiful piano accompaniment from Stephanie Hockley. Lez Brotherston’s Set and Costume are fantastic as usual, illuminated and enhanced by Lighting Design from Malcolm Rippeth, Sound and Video Design by Simon Baker and Animation by Beth Carter and Stuart Mitchell. Choreography by Alistair David is also perfectly nostalgic while free, bringing the best of the swinging thirties into the fray of modern bodies proudly expanding their language of movement.

“Long live our appetites, and may our shadows never grow less.”

Before their final showstopping number, Malory Towers digresses for a moment into the forests of Athens for a rendition of the opening of A Midsummer Night’s Dream; another loving ode to theatre and a choice cut of Oberon and Titania’s duologue about their relationship’s epic ripple effect upon the living world. This, and then a quiet, abrupt ending hauled back through two fourth-walls into modern reality, where the weight of resolutions unwritten is felt. Malory Towers makes goodness cool again. “It lies in you. It lies in me.” So, where next?