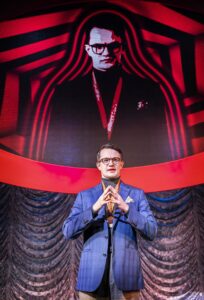 Rory Fairbairn as The Mind Mangler by Pamela Raith Photography

Creators of well-loved The Play That Goes Wrong, Mischief Theatre, team up with the renowned magical duo Penn and Teller to bring us Magic Goes Wrong. Having recently ended its West End run, the show is on tour with a fresh cast of performers playing a motley gang of average magicians putting on a fundraiser to raise money for ‘Disasters in Magic’ charity in memory of Sophisticato’s (the compere’s) father, crushed to death by magical props.

Sam Hill plays Sophisticato with great charm and is the glue that keeps the show together. Essentially performed as a series of vignettes with the various acts appearing and reappearing for different set pieces, it just about avoids unravelling into disjointedness by Sophisticato holding the thread. À la Lenny Henry on Red Nose Day, he returns to remind us of the running total raised, introduces a hilarious BAFTA-style slideshow of those previously lost to magic, and also performs his own tragic dove trick juxtaposed with the plinky plonk of ‘Close To You’.

The tricks are at their best when set up to fail, but in failing are actually demonstrating greatly skilled magic. Ever wondered what would happen if someone actually got sawn in half, or if an escapologist isn’t allowed to escape? Aside from these feats, Rory Fairbairn as The Mind Mangler, ineptly assisted by his housemate (Daniel Anthony) posing as an audience member, adds some audience participation to the evening by professing to be able to read people’s minds through the use of his heightened senses.

Obviously it ‘goes wrong’ until a last-minute reveal, but Fairbairn is so charismatic that the audience doesn’t mind at all. Jocelyn Prah and Chloe Tannenbaum are a delightful duo as Bär and Spitzmaus, and although Prah is at times seemingly stereotypically demoted to magician’s glamorous assistant, she gains laughs by milking her time on stage with unnecessary elaborate gestures. Valerie Cutko and Kiefer Moriarty complete the cast as magical patron Eugenia, and accident-prone daredevil The Blade.

A nod needs to go to the entire technical and backstage team. The show must be a health and safety nightmare to make sure none of the magic truly goes wrong. Luckily, following a final pièce de résistance, the entire cast were there for the curtain call.