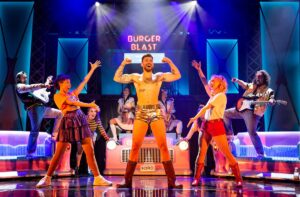 Oonagh Cox as Rusty, Jake Quickenden as Willard and Lucy Munden as Ariel in Footloose the Musical, photograph by Mark Senior

Sellardoor Productions opens its UK-wide tour of Footloose the Musical to an excitable audience in a packed house at York Theatre Royal. Essentially a feel-good story of love, friendship, and standing up for what you believe in, Footloose is clearly just the kind of toe-tapping tale that York theatre-goers have been craving post-restrictions.

The story takes place in the small backward US town of Bomont, a town which, under the guidance of the troubled Reverend Moore (Darren Day), has banned dancing. When high school senior Ren (Joshua Hawkins) moves into town from the bright lights of Chicago, it is clear that he is ready to shake things up and fight to get his new friends their all-important senior prom.

Day puts in a solid performance as Moore but sadly gets little chance to shake his own feet loose until the encore. Jake Quickenden is the definition of a crowd pleaser in his role as the good-natured and hapless Willard, and gets the crowd whooping during ‘Holding out for a Hero’ and ‘Let’s Hear it for the Boy’.

Whilst this celebrity casting pulls in some punters, and not without reason, the most impressive feat of this production is the casting (by Debbie O’Brien) of almost an entire company of actor-musicians. In place of a pit orchestra, the soundtrack is played live on stage by the cast brandishing a myriad of instruments, which brings a fresh dynamism to the show.

This talented ensemble cast is confidently and charmingly led by Hawkins, who finds a great likeable charisma in Ren. Lucy Munden makes a spirited debut in the role of Ariel, the rebellious preacher’s daughter, and shows great light and shade on her emotional journey. Oonagh Cox, Samantha Richards, and
Jess Barker make a fun Greek-chorus-style trio as her friends Rusty, Urleen, and Wendy-Jo.

Whilst the cast’s energy is undoubtedly infectious and the songs catchy, there are some moments that feel uncomfortably dated, for example the implied misogyny in ‘The Girl Gets Around’ and ‘Learning to be Silent’. One would also hope to see a more diverse cast.

Footloose continues its UK tour until August 2022 – further information and tickets available here. 2 for 1 tickets are available at some venues as part of the Love Your Local Theatre campaign.