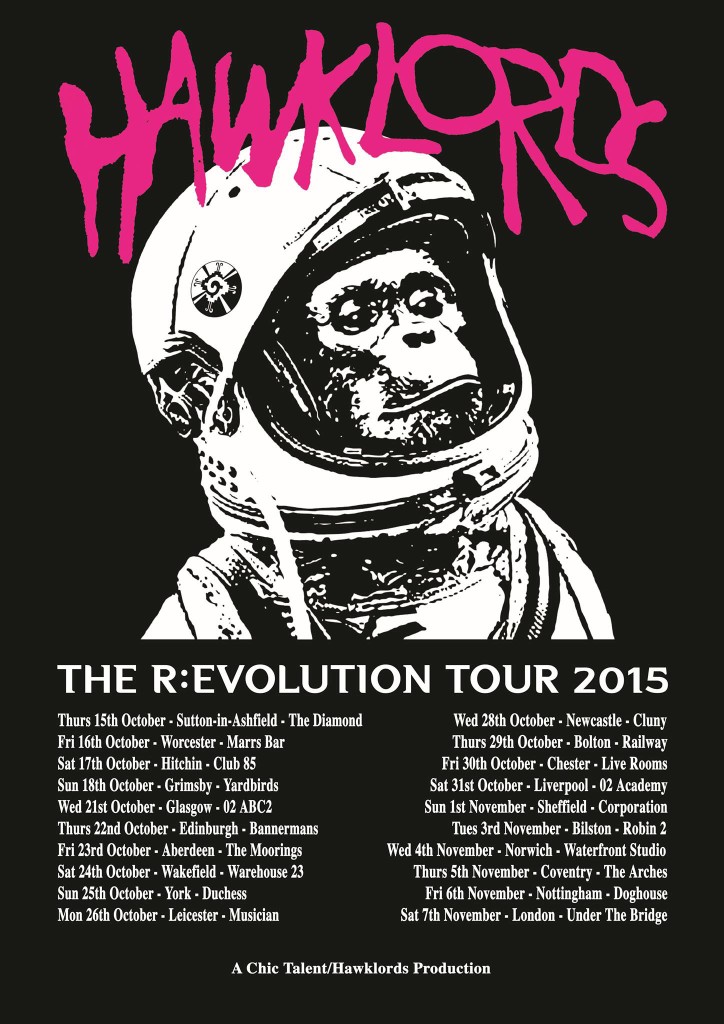 The R:Evolution tour from the indomitable and ever evolving Hawklords hit The Duchess and was witnessed by an energetic collection of long time fans who devoured their epic two-hour performance.

Hawklords, as a band, have gone through numerous permutations over the years as band members have shifted, swapped and changed more times than a Time Lord can regenerate. Through all this, though, they have never lost sight of the mischievous energy that they first sparked 25 years ago.

After a last minute cancellation of their support act, the main event started with little fanfare as the group ripped straight into a series of crowd-pleasers that included the propulsive Death Trap and Flash Gordon tinged Elemental Mind. This is space rock at it’s most exultant. Led by the wiry cosmic shaman vocalist Ron Tree who bobs, weaves and undulates throughout, the group initially focused on the business at hand rather than spending too much time interacting with the audience. Tree, as ever, lost himself in the sounds his band mates created, with many of the tracks utilising sprawling synth/guitar combo opens before launching into frantic punk-suffused lyrics. Combined with a custom-designed light show, it made for a heady brew.

They’re a tough band to define, which, in many ways, gives them their charm. It’s as though Ian Curtis and Damon Albarn merged into one vocalist via a witch doctor and joined forces with a mutant combination of 70s synth and 80s rock. The tracks undulate and change with seamless transitions – from expansive synth from Harvey Bainbridge complimented by exultant guitar work from Jerry Richards into almost poetic, juddering polemics from Tree. At one point, Tree donned a mask and jerked around the stage like an escaped robot from the set of Eyes Wide Shut. Relative newcomers Dave Pearce and Tom Ashurst complete the package and performed as though they’ve been part of the band from the start, which is no mean feat. It’s infectious stuff to be sure and it hit a number of high points, most notably during the playful rendition of new track Space Monkey, where Tree became even more of a man possessed and began to evoke the titular animal in question.

Overall, it was a pretty even blend of classic tracks and numbers from their latest album R:Evolution, which included the appropriately ethereal Dream a Dream and percussive Reanimator. If these new tracks are anything to go by, the new album shows they have no signs of slowing down anytime soon.

The set only just began to sag in the latter stages. At nearly 2 hours, it felt a touch overlong, although this may have been to compensate for the lack of support. This didn’t dissuade the fan base, though, who demanded an encore with fierce energy. They were not disappointed.

It was a bombastic night from a space rock band who refuse to slow down and continue to explore the space time continuum.