Death of a Gentleman plus Q&A session comes to York 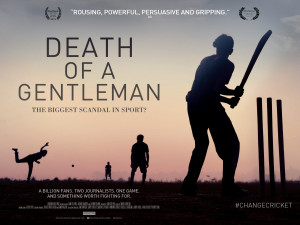 Death of a Gentleman plus Q&A with Christo Hird comes to City Screen on September 14th.

Documentary film Death of a Gentleman and a Q&A session with executive producer Christo Hird is coming to City Screen.

Death of a Gentleman depicts a complicated journey of two like-minded journalists from opposite sides of the world. They come together in order to find out why the purest form of the second most popular sport in the world; Test Cricket, might be coming to an end.

The film features journalists and avid cricket fans Sam Collins and Jarrod Kimber as they embark upon a world-wide mission. Their aim is to find out whether or not they are correct in thinking that their beloved 140-year-old game of Test Cricket might be in danger of being taken over by the shorter, more modern and more financially viable ‘Twenty20’.

They discover that corruption, greed and self-interest are all key players in the conversion of cricket from the Gentleman’s game. Money and sport are becoming intrinsically linked and it’s leading to the demise of the true spirit behind cricket and to the deceitful treatment of the fans.

As they travel from England to Australia, Dubai to Sri Lanka, the two journalists find the need not only to uncover the facts about their favourite game, but also to send a message to fans and cricket administrators alike – and on a wider scale to the whole world – as they contemplate its current state: “If you care about something that’s in danger, then don’t pass the buck, do something about it. Before it’s too late.”

The Death of a Gentleman and Q&A with executive producer Christo Hird will be showing at City Screen on Monday 14th September at 18.30.