Darwin Deez bring their radio-friendly indie-pop to The Duchess 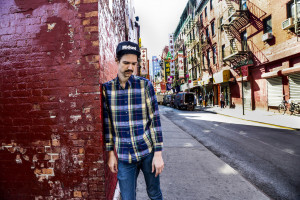 Darwin Deez is coming to The Duchess.

Best known for their songs Constellations and Radar Detector, they broke onto the UK music scene in 2010 with their self-titled debut album, reaching number 5 in the UK Indie Chart.

With his characteristic corkscrew curls, halo headband and oddball moustache, frontman Darwin Smith is the recognisable face of the band, but also the multi-instrumentalist responsible for recording, mixing and mastering their tracks.

The current UK tour marks the release of their third album, Double Down. Recorded predominantly in Darwin’s 6th floor apartment, the songs are tighter, crisper and more confident than previous material, demonstrating a dexterity for sonic textures and lyrical allegories. Gone is the awkward and whimsical pop of old, but the content is still utterly relatable, featuring tales of messy relationships and romantic failures on songs such as Rated R and Last Cigarette.

With sassy bass riffs, heavier drums and deeper stylistic content, Darwin’s honey vocals keep the songs catchy and upbeat. The overall effect is a positive and playful radio-friendly indie-pop tempered with a jaded cynicism that comes with age and experience.

Darwin Deez shows are famed for their dance interludes where the band down tools and perform synchronized routines to slowed down Spice Girls tracks. What is evident from their live gigs is how much the band enjoy performing to the audience, making for an evening of kitschy melodies and pop.

Tagged Darwin Deez, Double Down, The Duchess. Bookmark the permalink.