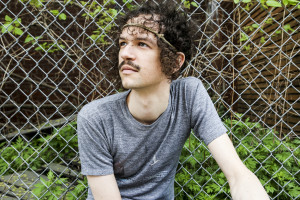 Darwin Deez frontman Darwin Smith is very much the face of the band.

If you haven’t heard of Darwin Deez, and are big on catchy melodies, infectious riffs and clever lyrics then check out their Soundcloud sometime, and see why they’ve acquired a small but devoted global fanbase.

The gig at The Duchess was certainly populated with Deez devotees, who danced and sang just as frontman Darwin Smith requested. While the setlist was predominantly new material from third album Double Down, the more recent songs didn’t gather the same enthusiastic reception as their well-played hits from 2010. But that didn’t seem to put the band off their stride.

Darwin Deez shows are famed for their dance interludes where the band down tools and performs complex routines to music mashups and the four band members dutifully, if not a little self-consciously, opened their set with a quick burst of dancing. Tales of doomed relationships followed with tracks “You Can’t Be My Girl” and “The Mess She Made”, before launching into radio-friendly ditty “Up In The Clouds” from their first album. With his characteristic corkscrew curls, halo headband and oddball moustache, Darwin is the recognisable face of the band, and proved to be a charismatic charmer, winning the audience over with his banter and flirting outrageously with the ‘cute’ merch girl whilst onstage.

An accomplished guitar solo on “Kill Your Attitude” reminded the audience of the Darwin’s dexterous talent, not only as a singer-songwriter but as multi-instrumentalist responsible for recording, mixing and mastering all the Deez tracks. The new album was recorded predominantly in Darwin’s 6th floor Williamsburg apartment, primarily because it was cheap, but the production values don’t suffer as a result.

Midway through the set, the band broke into a dance routine to Enya’s “Sail Away”, which was mixed with a Rage Against The Machine number for comedy effect. Darwin chatted to the audience like old friends, regaling them with a story about walking down the Shambles and sitting on a pew in Saint Margaret Clitheroe’s Shrine, one that only makes him even more charming and endearing. “We’re from New York City. Like York, only much newer. You guys would love it. Check it out sometime.”

The last few songs were reserved for the crowd pleasers such as “Radar Detector” and “Constellations”, before a raucous rendition of “Bad Day”. An attempt at walking offstage for an encore got abandoned quickly, and Darwin gave a rambling speech about buying merch to help cover petrol expenses “but only if you want to and can afford to. No pressure, people”. The live Deez experience was gloriously unpretentious, riddled with off-key singing, smiling faces and dorky dancing, making for a fun and frivolous Monday evening of upbeat nerd-pop and low-fi indie.