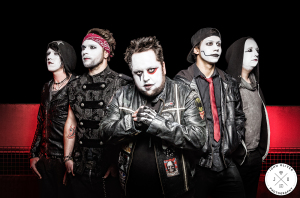 A Joker’s Rage, with their game faces on (photo by John Oliver Photography).

The alternative rock outfit, with Zakky Boy Taylor on vocals, Geordie Ginface on bass, Matt “Bam Bam” Collinge on drums, Adam “Twiggy” Gaunton and Al Scott on guitars, say they have tried to appeal to a range of musical tastes on this record.

Zakky said: “We have fans that are into indie, punk, electro and rock music. We’ve seen kids and much older people dancing to our music. This EP is about our band uniting with its audience.”

A Joker’s Rage have played a slew of gigs at the Duchess and Fibbers, acquainting fans with their gamefaces – heavy clown-like face paint they wear during live shows, like Kiss but in a new way. They have also been touring cities such as Newcastle, Leeds and Manchester and have even supported big name acts like The Darkness.

While they may use their make up as an opportunity to be whoever they want on stage, Zakky has affirmed that the lyrics behind the Black Sheep EP are based on the band’s personal experiences. 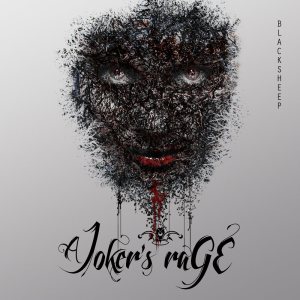 He said: “This EP came from a really dark place when I started writing it; a place filled with hatred, revenge and jealousy. I’d been stabbed in the back a lot and lied to. And the only way I was ever going to deal with it was to make this.”

It seems that the title of Black Sheep properly captures this feeling and the lyrical content. A sense of isolation and betrayal remains a key theme throughout the EP, as though the subject is an outcast that lives up to this figure of speech.

The record starts with the ultra-catchy Bounce, which will get stuck in your head. However, the tone changes throughout the record, with an epic atmosphere building throughout. While Bounce is a jumpy rock radio-friendly track, final song of the record Just Another Ghost seems well rooted in symphonic metal.

Of course, there are peaks and troughs in this rise of drama. While the title track has a lot of classical influence throughout, it is followed by the more contemporary hard rock song Temptress.

Black Sheep is a well-balanced, well-produced EP, which has all the makings of a mainstream rock record. Of course, it’s always great to see some home grown talent show everyone how it’s done.