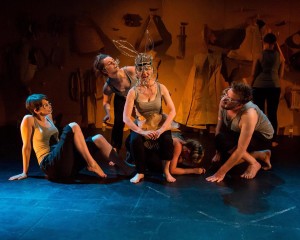 The character, Bottom, in the fairy kingdom. (Photo by Michael J. Oakes)

Well-fangled Theatre have eight actors making up the cast, taking on multiple roles and sometimes appearing in “surprising combinations”.

The comedy play follows two groups of people – four young lovers and six amateur actors – that enter the woods at night and are enchanted by the fairies that live there. Under the fairies’ spells, characters’ perceptions of each other are warped, as well as their own feelings and, in one case, physical appearance.

Mark France, director of Well-fangled Theatre’s adaptation, explained that this adaptation follows on from different approaches to Shakespeare that have been performed in the last couple of years, as well as a change in attitude in the way people talk about gender.

He said he selected A Midsummer Night’s Dream because it “offers such rich potential for creative interpretation, that I thought it would be really theatrically exciting to stage the play in a way that was a little bit more gender-fluid than normal.”

Some of the actors play different gendered roles and certain characters have been re-gendered. Mr France added: “For a few, the world is maybe a little less binary than we might expect.”

Mr France said that A Midsummer Night’s Dream is focussed on the idea of identity: “How the world defines us and how we define ourselves, how we perform that identity, how we sacrifice our sense of self when we are in love, and how we can lose it involuntarily under the influence of others.”