The Goat or Who Is Sylvia?: From American Dream to Greek Tragedy 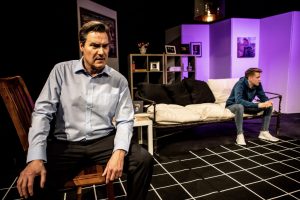 Bryan Bounds as Martin and Will Fealy as Billy in The Goat, or Who Is Sylvia?, image by Matthew Kitchen Photography

York-based Pick Me Up Theatre present the northern UK premiere of Edward Albee’s sensational black comedy, The Goat, or Who Is Sylvia? (or, Notes Towards a Definition of Tragedy). Once again transforming the black box John Cooper Studio into a completely fitting world, Robert Readman’s production design transports you smoothly to a liminal space; the perfect living room of a high-flying American family, in the moments before protagonist husband and father Martin drops a bombshell on it all.

World-famous New York architect Martin Gray has it all – fame, fortune, a happy marriage to Stevie, and a wonderful son Billy. But he’s hiding a big secret. And everything changes when he admits to his best friend Ross that he’s having an affair… with a goat.

The Goat caused critical controversy when it opened on Broadway in 2002, but was a big hit with audiences  – and went on to win the Tony Award for Best Play, forty years after Albee won the same award for Who’s Afraid of Virginia Woolf?

Serving a gratifying blend of stylised naturalism, the script is upfront about its darkness from the beginning – the title and synopsis lay it all out for you, and the teasing sparring between husband and wife turn on a hairpin to unveiled cold snark. Their remarks all the more cutting for their casual delivery. Switching between laugh-out-loud comedy and full-blown tragedy, the cast are superb, amply filling the angular stage with just four bodies in place of a full Greek chorus. Billy (Will Fealy) and Ross (Mick Liversidge) step in with demands of justification like an ensemble would, and Martin (Bryan Bounds) and Stevie (Susannah Baines) deliver stunningly crafted arias, philosophising and articulating every beat of emotion and analysis.

In Albee’s words, “The play is about love, and loss, the limits of our tolerance and who, indeed, we really are… All I ask of an audience is that they leave their prejudices in the cloakroom … and later — at home — imagine themselves as being in the predicament the play examines and coming up with useful, if not necessarily comfortable, responses.” Bounds’ delivery of one moment in particular provides deeply unsettling food for thought: “So what if it ticks over into something sexual for a moment? So fucking what?”

Directed by Mark Hird and helmed by Bounds, Head of Education at the American School of Acting, the play is in masterful hands, and the words come trippingly. What’s so powerful about this show is the incredibly well-adjusted, well-presented sense of calm and gentility about the family; their arguments all form so eloquently and so thoroughly that no stone is left unturned, no easy dismissal made of the action as unbelievable or avoidable, or however else we choose to label the usual necessary stupidity inherent in farce. This is precise absurdism for adults; a stylish, thrilling interrogation of our moral and social boundaries, wrapped up in a deliciously engaging performance in which the characters deconstruct a lifelong perception of happiness and devastate the very notion of family.

The Goat, or Who Is Slyvia? is playing at John Cooper Studio @ 41 Monkgate until Saturday 29 February, tickets available here. The show contains adult themes and strong language; suggested ages 15+. Don’t miss it.