Sea Storm in a Teacup: Kindness on land and sea 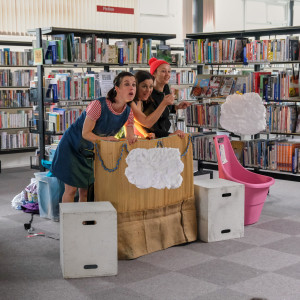 A lonely child who thinks she isn’t capable of making friends, an audacious first-time hot air balloon pilot and a demanding mermaid desperate to get back home, yet scared of what she’ll find…

Hoglets Theatre presents Sea Storm in a Teacup, a delightful show for all ages playing at libraries around the city this half term. As part of York’s Big City Read 2018 campaign, there are many different bookish events and happenings popping up in York’s libraries. But surely this is the most magical.

A lonely young girl called Merry (Lara Pattison) struggles to feel at home in a new town and is begrudgingly dragged to the fair by her Grandma (Anna Rose James). There, Merry takes pity on a pauper girl (Gemma Sharp) and gives her some money. In return she is given a magical teacup and told to fill it with water by the light of the moon. Here is where the magic begins, as a tiny mermaid appears who has been trapped inside by a curse for hundreds of years – but now she won’t stop growing!

“I don’t want to end up in an aquarium!”

From teacup to bathroom sink to next door’s pond, the mermaid grows bigger and bigger. But not just in physical size: she learns about friendship and grows in wisdom and kindness, breaking the curse put on her by the Sea Queen, and finally she is able to go home. Through their madcap night of adventure on a stolen hot air balloon, Bobby from next door and Merry find unexpected friendship.

“Kindness can set you free, be it on land or on sea.”

The production has a dream-like quality as the plot rolls on like waves on a beach, a cascade of events that take you forward before you realise what has just happened. The actors multi-role too, bringing a sense of familiarity to each new character. All sitting at the front, the children in the audience are rapt throughout as Merry confides in them, making them complicit in her adventure. “Wishes don’t come true,” she whispers at the start, unbelieving. How wrong she is.

With gorgeous mermaid puppets, shadow play, and music on toy saxophones, squeezeboxes and kazoos, this production is truly accessible and inspiring to young audiences. The three actors play out a heartwarming show that deserves to tour for longer than just the few remaining dates this half term.

“Faces they come and go, you learn from the people you know.”

Kudos to Hoglets Theatre and Big City Read 2018; it is refreshing to see a library so bursting with life. Tickets for the remaining dates are officially sold out, but there are waiting lists and potential added capacity. Watch the trailer and check performance times here.

Hoglets Theatre also run a range of weekly drama and storytelling classes for little ones, which you can find out more about here.