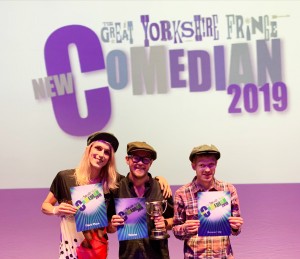 On the final Saturday of the Great Yorkshire Fringe, a crowd begins to shuffle into the Grand Opera House. Their clothes might be damp from the torrential rain, but their spirits are decidedly not as they take their seats for the final of The New Comedian of the Year.

Mick Ferry proves to be a wonderful and seasoned master of ceremonies, whip-smart and quick off the mark as he gently ribs members of the audience and recounts the perils of raising his teenage daughters. He nicely warms up the crowd as he begins to introduce the first of the eight acts, who all have a scant five-to-seven minutes to impress the judges.

Stand-up comedy is always a tricky thing to judge, as it is purely subjective – there is no baseline standard of quality, just the person onstage and their jokes. However, if you get a group of comedians together, the talent shines through without question, and you leave knowing who’s got it.

There are a couple of acts who fall a little flat – Nick Crooks, whose crude humour involving a sex toy made of a washing-up liquid bottle, is one of them, whilst Hannah Platt’s set about mental health, whilst well-written, didn’t quite hit the mark with crowd.

Meanwhile, there are some wonderful sets from the other competitors; Howard Anstock’s set on navigating the benefits system is beautifully delivered, and Michael Akadiri’s tales of growing up in London with his Nigerian family are well-crafted and make him a very strong contender. A special mention must be given to Hadfield and Swan, who produce an unexpected, but wholly charming musical set, in which they lay out their grievances with a range of subjects from the Tube to learning the recorder.

There are a few to watch out for – in third place is Umby Winters, a non-binary comic who delivers probably the set that was the most downright fun of the evening, complete with tossing a silicone chicken fillet into the crowd during an anecdote about being told to “get their tits out”. David Eagles takes second place with a fantastic set about blindness, armed with an array of puns that draws equal amounts of laughing and groaning from the audience.

The overall winner is Dave Bawden, whose dour persona and dark, often uncomfortable humour does draw laughs, but his one-liners border on tasteless at times and the monotone delivery does nothing to help it.

Previous winner Mark Grimshaw also makes an appearance whilst the judging takes place to round out the night with a nicely-crafted set pondering autism, jobs, and Northern trains.

Judging comedy is a matter of personal taste – what appeals to one person might leave another cold – but the high standard of comedy across the board proves that when you’re looking for talented comedians, whatever style you prefer, Yorkshire has them in spades.

The New Comedian of the Year Final took place at the Grand Opera House York on Saturday 27th July 2019. Check out the rest of the Great Yorkshire Fringe festival programme here.

One Response to Great Yorkshire Fringe – The New Comedian of the Year Final: review