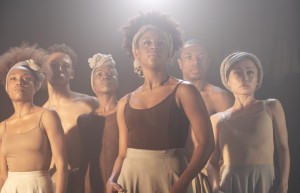 Led by Artistic Director Cassa Pancho, recent recipient of the Freedom of the City of London for her contribution to diversity in ballet, the company celebrates dancers of black and Asian descent.

The triple bill, as usual, begins low-key with a reprise of Martin Lawrance’s PENDULUM – an intimate duet that premiered in 2009 and the choreographer’s first work made for the company. Donned in simple black shorts and vests evocative of fencing attire, dancers Marie Astrid Mence and Ebony Thomas captivate the theatre in complete silence for several minutes before composer Steve Reich’s soundscape comprising pendulum clicks ebbs into the space, gradually building an atmospheric wall of sound including electronic drones and tick-tocking echoes that could be either a record scratch or a heartbeat. Somber and stark, this concentrated opening showcases the performers’ masterful hold of tension and focus, using the more simple gestures in their repertoire interposed with flairs of emotional narrative.

In beautiful contrast to PENDULUM, next up is CLICK! – an original, light-hearted work by Scottish Ballet’s choreographer-in-residence, Sophie Laplane. This playful disco ballet with music arranged by Kenny Inglis has the air of a theatre games workshop devised just to the point of eking in hints at emotional or intellectual intention, before suppressing any sense of freshness and experimentation. Isabela Coracy performs a central motif as an enigmatic spotlit dancer (lighting design by David Plater), enjoying an individual space for their body, facing the back of the stage and playing a puckish puppeteer to the ensemble in this joyful piece. It is not however without droplets of the threat of damage; record crackling and body isolation used to signpost the through-line of the tryptic and what is yet to come.

Completing the evening in Ballet Black’s signature of exponential crescendo is INGOMA (meaning song), created by company dancer and choreographer Mthuthuzeli November. A fusion of ballet, African dance and singing, it portrays a milestone moment in South African history and imagines the struggles of black miners and their families in 1946, when 60,000 of them took courageous strike action.

With composition by Peter Johnson and design by Yann Seabra, INGOMA weaves music, movement and poetry (Asisipho Ndlovu Malunga) into a complex language of urgency, anger and frustration. Headlamps, floodlights and dusty, baggy costumes complete a picture of warm, smoky yellows and beiges, which steeps as the house lights sink slowly after the interval. Piling sacks of shale into a roped-off crunching pit at one side of the stage, the performers (Coracy, José Alves, Alexander Fadayiro and Sayaka Ichiwaka) then dissipate and reconvene repeatedly to drive various moments in this powerful story.

Potent moments of synchronicity across the company include a lurching macho march to front, and rousing clapping and chanting that unites them in prayer, impressing healing and galvanisation. Naturally soft sounds like birdsong are introduced eerily into the hellscape, preminiscing a duet wrought with motherly feeding, scooping gestures as well as an ominous, weighty pain.

Thomas performs an incredible solo piece culminating in a physical collapse, caught and guided by a council of female dancers who arrive in order to pick him up and return his tools quickly to his hands, reminding us of what is most important about his recovery: his continuing labour. There are palpable parallels to Kafka’s Metamorphosis and similar dystopias voiced by the oppressed working classes, particularly in Thomas’s frantic sequence that speaks to transformation and exorcism. Some kind of poison is being expelled.

The yellow hues are replaced by cool grey-blues, the smoke now more visible and the women taking centre-stage with violent, wary insect-like physicality, frequently reaching across the space with flinches and flicks, returning inwards only to shudder as if preparing to send out venomous spines. Cira Robinson delivers the first female solo piece in this enchanting  sequence. These witch-like, hungry gods underground are lead to revolution by a magnetic solo performance by Mence, ending with a knocking wake-up call to the audience.