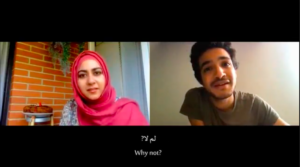 Image courtesy of the author

A mother. A son. Two terrible questions. What’s a life worth living? What fights are worth dying for?

What’s Left Is Right, a play written by Konrad Suder Chatterjee and co-directed by himself and Cerys Baker, premiered during the Act II Festival this July. It tells the tragic story of Kareem, a Palestinian teen who’s been arrested and detained in Israel for the fourth time. On his sixteenth birthday, he confronts his mother Leyla back in Bil’in, a village near Ramallah, during a rare online video call about his desire to end his life with dignity. As Kareem is a minor, his euthanasia requires her consent. Chatterjee uses this fictional situation (active euthanasia is, at the time of writing, not permitted by Israeli or Palestinian law) to plunge the audience into the harsh realities and sacrifices of Palestinian resistance. “I added it as a fictional element for a reason; as a lens through which I want to explore the theme of the fragility of mental health of teens under the protracted military occupation,” he says.

Birthdays are a celebration of life, a hopeful beacon towards a new year of opportunity and growth. Kareem, played with care and subtlety by Zakaria Bekkali, has had those feelings of optimism and yearning for the future crushed by an oppressive regime and a lifetime of having to fight for the right to live in his own home. At his young age, he’s seen more hurt and been subjected to more aggression than anyone should have to witness in a lifetime.

What’s Left Is Right shows the audience that he is part of a generation sacrificed on the altar of adults’ and politicians’ power struggles. Through his desperate plea for the right to die, the play denounces what the author believes is a cruel oppression technique used by Israeli forces to quash Palestine’s claims to land and free life: beating out the Palestinian children’s thirst for life and energy that could have sustained future resistance. “In my view the Israeli detention system is systematic and strategic as a means of a removal of childhood, a suppression of the political will of the children and their identity, their civic participation and their occupation resistance”, Chatterjee explains.

Through this intimate and gut-wrenching conversation between mother and son, Chatterjee manages with great skill to interlock the personal and the political. We ache for this mother, Leyla, played with tenderness and authority by Simran Singh, who has to listen to the fruit of her loin ask her to sign his (voluntary) death warrant on the day they celebrate her giving birth to him. We feel for this boy, too despondent and lonely for his years, who has been stripped of all sense of agency. “I don’t want to live to resist. I don’t want to be a hero,” he cries. Chatterjee says, “I am challenging the mainstream notion of the romanticised resilience of Palestinian children and adults.”

The need for the crew to adapt the play to the COVID-19 context following the closing of theatres and turn what was an in-person interaction into a video call only heightens the dramatic tension. These aren’t things to be discussed at a distance, but in dire circumstances, there might not be a choice. And so the audience serves as the only witness to these two characters’ struggle to connect and understand each other.

What starts as an opportunity, through some joyful song and cake, for this family to forget the cruel pain of parent and child being unlawfully separated, ultimately forces us as an audience to ponder the meaning of patriotism, to weigh the mental health toll of state violence and ask ourselves what kind of world we want for our children. In a frightening barrage of statistics about the persecution of Palestinians displayed at the end of the play, it becomes apparent that Kareem’s situation is sadly widespread. According to NGO Defense for Children International Palestine, since the year 2000 an estimated ten thousand children from the West Bank have been detained by Israeli forces. Faced with accounts of such violence, feelings of levity become impossible, for Kareem, Leyla and all of us watching them.

“In reality,” the author says, “Israeli military detention centres deny the vast majority of children – 96% according to DCI-P, linked above – their right to the contact with and the presence of a family member, especially during an interrogation.” Thanks to this radical fictional conversation, we as audiences of the international community can no longer turn a blind eye to Palestinian suffering. As we watch this on our screens, during a global pandemic that has drastically narrowed our physical horizons with consecutive lockdowns, we are reminded of our place in the world at large and the power we can still have through our words, our advocacy online and by supporting the initiatives of those who fight to keep us aware of all the injustices still taking place in the world.

This one-act play is the first of a trilogy exploring the human consequences of Israel’s military occupation of Palestine. This first offering, which benefits from the support of many intellectual luminaries from Palestine and SOAS, where Chatterjee has studied, is a thoughtful and moving work of militant theatre.

What’s Left Is Right enjoyed its public premiere online on Saturday 14 November 2020, and remains available to watch on YouTube.

Special thanks to the author for entrusting this universal review to Arts York.

*This article was last updated on 22 November 2020