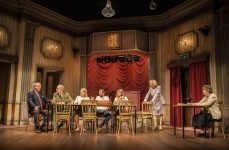 Directed by Robin Herford, Ten Times Table is the inaugural production of the Classic Comedy theatre company, produced by Bill Kenwright and his team behind other sister compaies: the Agatha Christie, the Classic Thriller, and the Classic Screen to Stage theatre companies – which between them have enjoyed over 15 years of theatrical success across the UK. Somehow, this relic script has long outlived its bedtime and appears to be reaping similar attention. Continue reading →